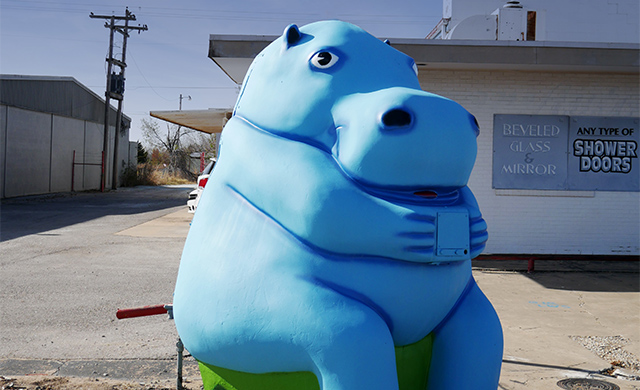 You’ve driven past it a hundred times, and maybe even wondered, “Why is there a Blue Hippo along Broadway?” The hippo’s origins are a little foggy, but its place in Edmond culture is unmistakable.

Bud Fisher’s knowledge of the hippo, whom he calls Happy Hippo, goes back 30 years. “I was told that he once belonged to an aquatic center that went out of business,” said Bud. “Water used to shoot out of that box the hippo’s holding.”

Bud inadvertently acquired the hippo when he purchased an old construction company in 1991, which came with a variety of equipment pieces and work projects left in the back lot. The hippo lay in two pieces, along with an elephant that was in too many pieces to save. Bud put Happy in front of his shop, Glass Solutions, and he’s been “happily” smiling at Edmond drivers ever since.

But if you think the blue hippo’s story ends there, then you haven’t heard about the many adventures of Happy. His first kidnapping was in the early 1990s by high school students at Edmond Memorial High School, who somehow hauled the hippo up onto the gym roof! Thus followed a long string of hippo-nappings by students from rival high schools.

“One time, some Santa Fe High School students asked permission to borrow the hippo for a teacher’s birthday surprise. I agreed, but while there, he was spirited away by Edmond North,” Bud said. “He was also put in the pond of Oklahoma Christian University (then Oklahoma Christian College) as a fraternity prank.”

Poor Happy has not survived all of his travels unscathed. He’s gotten bumped, scraped, and even fallen out of a truck. Following multiple repairs, Bud mounted him more securely. Happy also suffers from sun exposure, which leaves him looking pale at times. If you’ve driven by recently, you will notice that Happy has gone from faded light blue to a vibrant turquoise. “My son repainted him with an airbrush,” Bud said. “I remember repainting him at least four times before I retired and turned the company over to him.”

Bud is amused by the hippo’s legacy. Although Happy was not originally a Route 66 landmark, he has become one. Travelers along the Mother Road often stop to take a photo with Edmond’s blue hippo.

“He’s become famous. He’s been in the newspaper lots of time. I’ve seen cheerleaders pose for photographs in front of him. I’ve seen parents drive up and let their children out of the car to kiss him, although I wouldn’t say he’s sanitary,” Bud said with a laugh. “I think it’s wonderful how taken people are with him.”

Although Happy Hippo’s age and origins remain a mystery, he has firmly, but smilingly, staked his place in Edmond’s history. 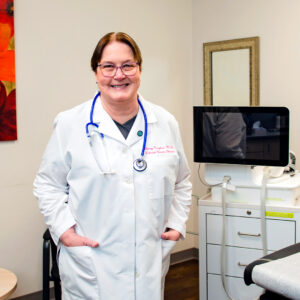 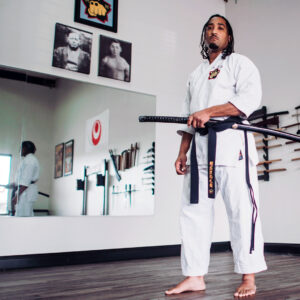