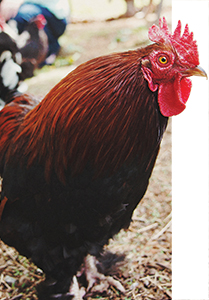 Terry Stilwell of Oklahoma City peers into the wooden box set up in the shop he has behind his house. Inside, a pillow of gray feathers bundles on top of six bluish-gray eggs, and little black eyes peer back at him from a bright red face.

“Hey sweet girl,” Stilwell, the ranger at Camp DaKaNi in Oklahoma City, coos at her. “You sitting on some eggs, sweetie? You’re my little eggy girl, huh?” He tries to lift his chicken up a bit to show off the eggs. Normally affectionate, the hen isn’t in the mood for shenanigans, and she causes a fuss. “It’s okay, baby girl,” Stilwell says. He’s a tough man, used to doing heavy labor while running the campground, but around his chickens, he’s gentle. “You’re okay, sweet girl.”

Outside, another hen is riding on top of a donkey. The donkey doesn’t mind, and the hen fits perfectly in the swoop of his back. Stilwell has three Americana chickens—two laying hens and a proud rooster—as well as a mating pair of caramel-colored Bourbon Red turkeys. In a warm box, a dozen or so little turkey chicks prance around warily.

“They all hang out together,” Stilwell said of his chickens, turkeys, goats, donkeys and Great Pyrenees dog. “I like the chickens. The rooster can be a jerk. He’ll try to spur me sometimes if I try to pick up the hens. They all eat a lot of bugs. They’re funny.”

PART OF THE FAMILY

When life gets too much for Jacey Hyde of Forest Park, she wanders to her backyard to sit and relax. The baby won’t let her sleep, the day’s anxieties build up, or she just needs a time out. In the midst of the stress of the day, she rests her face against the soft feathers of the chicken on her shoulder. Its pinkish red face with bright, beady eyes looks ahead and it perches there, cooing in that gurgley way that chickens do when they are content or want to say something. 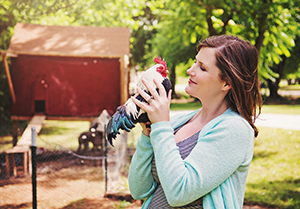 Just having these birded companions eases away the worries of Hyde’s day, and they are like that friend you always call when you need a boost. “I sit with the chickens when I am stressed out,” said Hyde. “It makes a difference, and they make me happy. They sit on my lap or on my shoulder, and each of them has their own personality. They are just so entertaining, and I go sit with them and watch.”

Hyde and Stilwell among the many Central Oklahoma residents who own urban chickens, and like most everyone who raises chickens, love them. Hyde’s six Bantams are full of life, she said, and as an added bonus, full of fresh eggs.

However, Central Oklahoma has a love/hate relationship with the farm birds. In Edmond and Oklahoma City, citizens currently cannot own backyard chickens. Outside the city limits, however, homeowners love their birds and cannot understand why the urban townships won’t at least allow the quieter hens to be kept.

The chickens are more than egg dealers. For many owners, the fowls are feathered friends as well. “They are such a joy,” said Hyde. 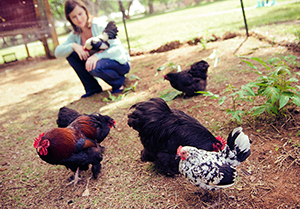 Talk to any of the chicken owners and they all say the same thing. The eggs are definitely a treat, but the chickens’ insect hunting skills and funny personalities steal the show. Shelly Anderson of Anderson Organics south of the Oklahoma City metro sees them as pets and as valued members of her family.

“I go outside, and they are happy to see me,” she said. “They think they are pets. They like being petted, and I see them cuddling up with the cats on the hammock outside or running with the dogs. Each one is its own little person. You have the bossy one, the shy one, the funny one and the crazy one. It’s a show every time you go out there.”

Anderson began raising chickens for eggs and natural insect control. Her chickens snatch mosquitoes out of the sky and pluck nasty ticks out of the grass. They are natural fertilizers too, she said. “Everyone works at the farm, and the chickens do too,” she said. “We take care of them, and they take care of us by giving us eggs, killing insects and fertilizing the ground. When they see us coming, they make this happy little sound and talk to us. They cluck and get all vocal, like they’re trying to tell you ‘hi’ or something.”

Hyde hand-raised her six chicks in the bathtub of her house. She bought them as hatchlings, and they imprinted on her. She’s the mother hen of six, all named after female country singers. All was well in Hyde’s chicken world until she realized Reba or Dolly actually should have been called Richard or Donald. “It turns out three were roosters,” she said. “I had no idea. Suddenly, I’ve got these roosters with girls’ names all strutting around like they are a big deal. I didn’t want roosters, because they can be aggressive and loud, but all our chickens get along, because they grew up together. Each has its own little job, and they don’t fight. I’ve never seen a single one of them draw blood.”

The chickens add excitement to her life as well. “When they were little chicks and still in their brooder in the upstairs bathroom, I would go in and just watch them,” Hyde said. “One day, when they started getting feathers, one chick flew out of the brooder and landed on my lap, followed by another, then another until I was covered in baby chicks.”

The roosters think Hyde is part of their harem of hens. She’s nothing but a featherless big girlfriend, so the roosters are as protective of her as they are of the other chickens. “Of course, it’s hilarious to watch my husband do work inside the coop or the run because the roosters are relentless with him,” she said. “They love and protect me, but my husband is fair game. It’s pretty funny watching a grown man fighting off three Bantam roosters to collect eggs or paint the coop.” 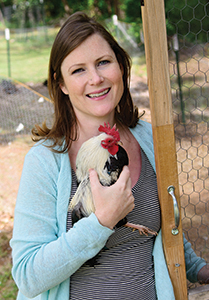 Fresh chicken eggs not only taste better, Anderson said, but they are filled with higher amounts of Omega-3 and more. “I have a flock of chickens and I haven’t bought eggs in years. I get enough from them, and oh my gosh, they taste so much better,” said Anderson. Many times, she said, the eggs in stores are already three weeks old and taste weak compared to her eggs. “Two chickens can give you plenty of eggs,” Anderson said. “It’s easy to raise them, and you’ll never taste anything better.”

But ask anyone with backyard chickens if they kill them for food, and you can hear the horror in their voices. “Oh, no! They are family! They are our pets! We would never do that to them,” Anderson said. “No way,” said Hyde. “They’re like my children. I couldn’t ever kill them. It’d break my heart. They are too funny and entertaining to have around to ever kill them for food.” Stilwell agreed. His chickens keep the yard free of pests, and they are friends with the dog.

Having backyard chickens is as easy as building a simple coop. For less than $10, a family can buy two young birds to raise for eggs and fun, as long as it’s legal where you live. “You can get on Craigslist and find chickens. Pullets are younger chickens who are almost ready to lay eggs, and you can get them for $3 to $5 a piece,” said Anderson. “A simple coop will cost about $30 to $40. It’s easy to have a couple of chickens in your backyard.” 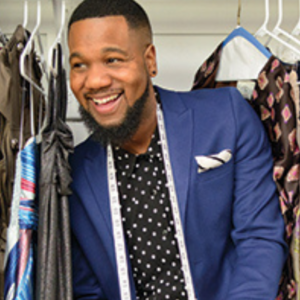 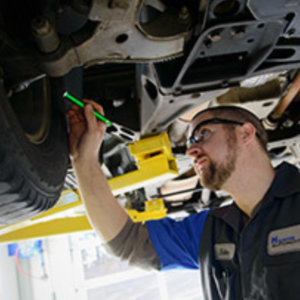 by Amy Dee Stephens
As a young boy, Blake Harris was always enchanted by the workings of an engine.
Read More  >