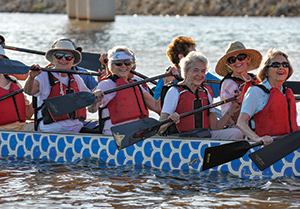 Oklahoma City’s Devon Boathouse District hosts athletes from around the world, but it’s the Golden Dragons paddling team that continues to earn a standing ovation at competitions. And they haven’t even won a race—yet.

“There’s something inspiring about seeing a boat full of 70- and 80-year-olds racing against younger athletes,” said team captain, Debbie Miller. “We’re white-haired people who are defying a stereotype,” said Nancy Tarr, age 74. “I’m one of the younger ones, but our average age is about 84.”

The mostly-female team paddles in 20-person boats called dragon boats, which resemble ancient wooden boats from China, although the modern version has a removable dragon head and tail that clamps on and off. “It’s like a large canoe,” said Mary Jo Blakeburn, age 78. Gail Kelley, 73, described the boat’s appearance as “a mean dragon—like we’re going to eat up the other boats out there!” she laughed. “That hasn’t happened yet, but we keep trying.” As surprised as onlookers are by the senior team, it’s the spirit of the individuals that is most remarkable. “I have two teen granddaughters who race, so why can’t I do it too?” Tarr asked.

Miller, who is the Director of Wellness & Resident Relations at Spanish Cove Retirement Village where the team is based, attributes their upbeat spirit to their philosophy—to remain physically active during the aging process. “During training season, we practice leaning forward from the hips and straightening up, because paddling isn’t strictly about arm movement, it’s about using good body mechanics,” Blakeburn said. 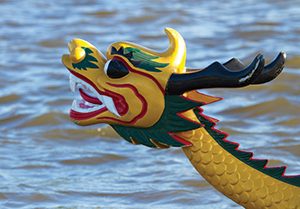 Racing wasn’t on anyone’s radar during the first season, three years ago. The team participated in the 10-week boating session for “fun, fitness and fellowship,” and then Miller received an email with their race time scheduled. It was no surprise that the spunky athletes were up to the challenge. “At the end of that first race, a huge group of people from the boathouse foundation were waiting for us at the finish line. They said, ‘Congratulations, you just made Oklahoma history as the first senior dragon boat team on the Oklahoma River!’ That was a magical moment,” Miller said.

The Golden Dragons formed after another Spanish Cove resident, Ann Lacy, agreed to fund the purchase of a dragon boat, and she approached Miller about forming a team of residents. “I’ve always been physically active, so I was excited about the opportunity,” Tarr said. “Dragon boats aren’t as taxing as other boats, and the race time isn’t very long, so none of us get overly tired.”

Camaraderie is a motivating factor for all the team members. They travel together in a bus and, like any athletic team, follow a practice ritual. “We get our paddles, our vests, and line up in two rows,” Miller said. “Then we march down to the boats and load up. It’s funny because some of the residents are really competitive about where they sit—they seem to think that closer to the front means they are better.”

The paddlers are anticipating the formation of other senior teams and are excited about competing against boaters closer to their age, but Miller says that they stand by their original challenge. “Race against us, no matter what your age. We’ll take you on!” 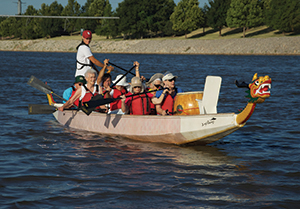 “Our philosophy is that if we complete the race, we’ve won,” Blakeburn said. “It’s such an inspiration to participate with people who have a zest for life and are willing to try new things.”

“There’s something about being in the open air, on the water, with 20 people working toward the same goal. Miller said. “Hopefully we’re changing a negative stereotype about aging. The Golden Dragons are living proof that you can be physically active—even competitive—into your 70s, 80s and 90s.” 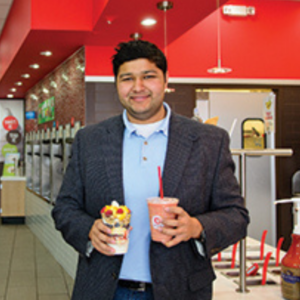 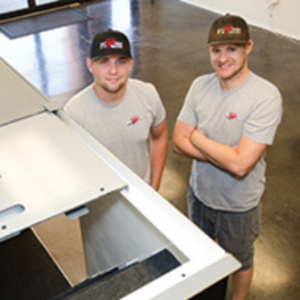