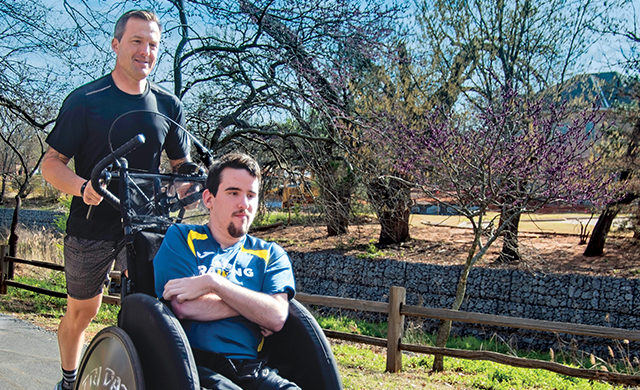 At 21 years old, Bryce Wooten of Edmond was going to tackle the Oklahoma City National Memorial Marathon for the first time in his life. Along with friend, mentor and trainer Rian Smoak, 45, of Oklahoma City, Bryce has a mission to show everyone that amazing things can be accomplished if you put your mind to it. A 4.0 GPA student and current University of Central Oklahoma student, Bryce wants to be an inspiration for everyone who has ever felt different, separated from society or just helpless because they think they “can’t.”

“I’m doing this as a chance to break the emotional and social boundaries that people with physical disabilities like myself face,” Bryce said. “I’ve had this goal since about age 13 but I didn’t have the right resources. Then my friend Rian, who I’ve known about 10 years, reached out to me in early February and gave me this idea of running this marathon and raising awareness throughout the world. And as soon as we got done with that conversation, it just sparked my interest.”

Oh, by the way, Bryce has Cerebral Palsy and is currently confined to a wheelchair, but don’t you dare think for a second he can’t reach his goals. If one thing defines Bryce, it’s his mission to show the world that everyone – including those with disabilities – can achieve the amazing, and he’s going to prove it with a little help from some friends.

Finding a Way to Give Back

Bryce was born with Cerebral Palsy, which gave him a level one bleed in his brain as an infant that attacked his motor skills. “As my doctor says, ‘It landed right in the sweet spot,’” Bryce said. “My parents didn’t treat me as different, but right after the age of 12, when we were transitioning to middle school and stuff, my friends that I had growing up started to change. They started finding cliques, and for the first three or four years before I really found myself, I was at a really deep, dark place. I was very depressed and I didn’t know my future. And then I asked myself ‘what do I need to do?’ I’ve always tried to help other people with handicaps and stuff like that and find the answer to why we’re here.”

Rian Smoak knew both Bryce and his twin brother as they grew up. His son was close to both boys, but as the kids grew up and graduated, they all grew apart.

“I haven’t seen him since the boys graduated three years ago. I’ve done Ironman triathlons for the last 10 years, and I competed in the Ironman World Championships in Kona, Hawaii last October. I remember just how much it was a lifelong goal to do that and all the work I put into it,” Smoak said.

“I remember how amazing it felt crossing the finish line. But it was something that only I could feel. Right then, I knew I wanted to do whatever I could to give somebody else an opportunity to get that same feeling.”

Four years ago, Smoak started the Tri-Dat foundation. The “DAT” stands for “do amazing things,” and whenever Smoak saw somebody in need, he would try to help out.

“I have a large group of friends who do triathlons together and we kind of instill that same philosophy. We want to help people do amazing things through whatever it is – volunteering, giving back, whatever,” Smoak said. “And now it’s evolving more and more over the years. I want to do something to partner with somebody who shares the same spirit as I do so we can really go out and open people’s eyes.”

In the back of his mind, Smoak kept thinking about Bryce. So, in early February, he reached out to the family to see if Bryce would be interested in running the Oklahoma City National Memorial Marathon.

“In my mind was the idea that I was going to give this opportunity to help him and help him do whatever, but the first words out of his mouth were, ‘Rian, what can I do to help you?’” Smoak said. “And I was so humbled. He told me his life goal and his ambition was to inspire others. I’m like, ‘wow, this is like exactly what I’m looking for.’”

A Mission with Motion

Bryce and Rian worked out once a week to prepare for the 26.2 mile race. Rian didn’t make it easy for Bryce either, working his legs with the ultimate goal of Bryce walking again.

“It’s no picnic,” Bryce said. “Rian doesn’t cut me any slack. He wants me to eventually get to my goals of living on my own. I’ve always wanted to feel like an individual, because I feel a lot of the people with physical disabilities don’t feel like an individual. Society has lower standards for people like us. And I want to be the person to stand up for those who can’t speak or don’t know how to speak.

During the race, Rian ran with Bryce in a specially designed cart. Although technically Bryce was “along for the ride,” he was an active part of the training and the run. And he knows some people may not understand that.

The two athletes became closer in the mission to train and raise awareness. Bryce’s father passed away two years ago, leaving a hole where Bryce’s biggest champion used to be. Rian, in a way, has stepped up to fill that role as both a friend and a mentor.

“My dad and I were the best of friends. He always said that when you found what it was you were meant to do, you would just feel it with every ounce of your being. And this is it. This is what I was meant to do,” Bryce said.

When Bryce and Rian crossed the finish line, they hoped they inspired others to overcome their own fears and challenges to do amazing things.

“Things that weren’t possible became possible because Rian gave me a sense of belonging,” Bryce said. “I hope to be a mentor for others to find their ‘why.’ I think people go all their lives and have no idea why they’re here exactly. Get up and find your life. Even something as simple as a ‘hello’ could change somebody’s life.”

As for the future, Rian said Bryce will take the foundation Tri-DAT to the next level. The pair plans to enter the Redman Triathlon in September with the ultimate goal of competing in the Ironman World Championships in Hawaii.

For Bryce, partnering with Tri-DAT and running the marathon may just be the spark people need to change their mindset.

“Maybe people will begin to accept other people,” he said. “You never know what you can learn from somebody who is different.” 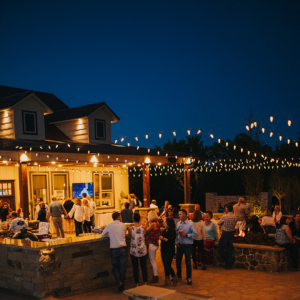 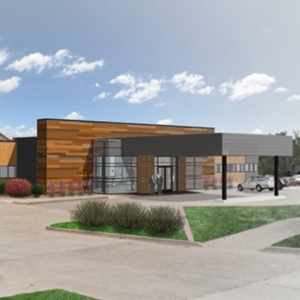