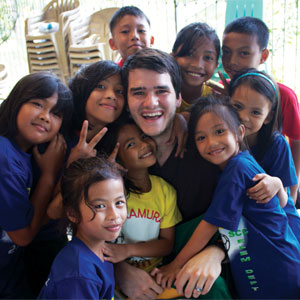 Fighting poverty is a noble and often challenging mission. Sizable accomplishments require time, dedication and a good strategy. David Bowden knows this firsthand. The vice president of local nonprofit Give a Goat recently returned from his second trip to the Philippines where he and his wife, Meagan, connected with those who need their help the most. “I have been working with Give a Goat for over two years,” said Bowden. “Unlike my first trip, when I only visited for two weeks, this trip lasted three months. We decided we needed to have an extended presence in the field in order to build healthy relationships, gather reliable information, and connect more deeply with those we were helping.”

Former Oklahoma Christian University student Peter Cariaga founded the Give a Goat nonprofit on the OC campus in 2006 to teach his fellow countrymen how to raise goats as a sustainable way to provide for their families. Goats are given to the families, providing milk that can be used for food or sold. Goat milk is especially suited for a lactose intolerant population like the Philippines. It can be turned into cheese, yogurt or butter. It also can be used for making soap, lotion and other products. Goat manure is a natural fertilizer that can help farmers raise healthier crops. When goats are no longer productive, they can be sold as meat. Goats reproduce often and families have the opportunity to raise their own herd.

The Philippines is an archipelago comprising of 7,100 islands and has a population of about 94 million. According to the latest U.N. statistics, almost half of the population lives on less than two dollars a day and the poverty rate is projected to grow. “My wife and I lived on Lapu-Lapu. We resided in a small rent house in what is known as the ‘firework village.’ This village is filled with nearly 30,000 people who supply the Philippines with their stocks of fireworks by making every piece from scratch,” explains Bowden. “These hardworking people spend every second of daylight mixing black powder, rolling shells, drying wicks, stuffing mortars, and rolling explosives for around $1 to $2 a day. They live in a perpetual cycle of poverty. Loan sharks give them money to buy their supplies at extremely high interest rates. The workers buy their supplies and work long hours for pennies on the dollar.”

The workers are left with barely enough to provide for their families. Many families pull their children out of elementary school to help roll fireworks before they even finish the first grade. “My wife and I knew that we had to do something about this problem, and that giving goats was a wonderful solution,” said Bowden.

One worker’s story especially struck Bowden and his wife. “We met a wonderful woman named Mary-Ann. She was a hardworking mother of two and was struggling to get by. In between her work with the firecrackers she was doing manicures and pedicures for about 50 cents. Even with this extra income she was having a hard time providing for her family.” After about a month of conversations and training, the Bowdens bought the supplies and built Mary-Ann a goat house. “In about three days it was finished. We went and purchased two pregnant females and one male and gave them to Mary-Ann,” he recalls. “We told her that she did not have to be poor, and she did not have to be hungry. She now has six goats, can afford more food and clothing for her family, and is on track to send her children to school all the way through college.”

The nonprofit distributes goats only to people who are willing to learn how to take care of them. The goats are considered borrowed and families are not allowed to kill them for food or sell them for money. They can keep the offspring and potentially double their income. So far, Give a Goat has distributed more than 1,500 goats and has helped 137 families. The target for the next five years is 10,000 goats, and in 10 years the nonprofit hopes to reach the 100,000 mark.

“It’s amazing the difference I’ve seen even in the one year between my visits,” said Bowden. “Give a Goat has boomed to nearly every major island in the Philippines, and each hub is more amazing than the last. Time after time, we heard story after story about how goats are changing people’s lives for the better. We saw sons providing medicine for their parents, parents providing education for their children, and families providing resources for their communities, all through the gift of a free pregnant goat.”

“These stories are compelling but there are always more families to help than what we have funds available,” said Give a Goat’s president, Bryan Clifton. He explained one goat costs about $50 and one of the biggest challenges for the organization is saying no to families because of lack of resources.

Give a Goat partners with several local organizations, such as churches, clubs and schools and there are plenty of volunteering opportunities for those who want to get involved. To learn more about Give a Goat or to volunteer, go to www.giveagoatnow.com.