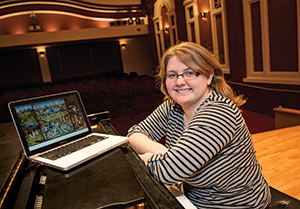 Amelia Hamrick never expected to become famous for discoveringand recording a line of music hidden in a 500-year-old painting—especially since the music was located on the rear end of a naked man. But funny things happen to college students in the middle of the night.

The discovery occurred in February on the campus of Oklahoma Christian University. You might expect this to happen to a student working in a darkened library, poring through books to find a thesis-worthy project, but no, the scene was far different. Instead, imagine a white-walled conference room in the honors dorm, with a few tables, chairs and a white board with calculus written on it. It’s one o’clock in the morning, and the room is occupied by a few scattered students. Amelia and some friends are chatting about the odd 1500s Hieronymus Bosch painting they learned about in history class. She pulls up a high-resolution version of the painting and scrolls around for a closer look. She finds a unicorn, a porcupine, and, lo and behold, musical notes. 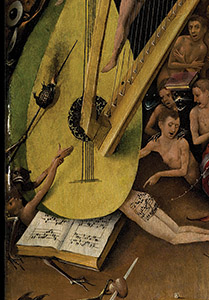 “Hey, guys, this dude has music written on his rear end,” Amelia says. “I’m totally going to transcribe it.” Within thirty minutes, she has entered the notes into a musical composition software, and she and her friends are the first to hear a piano version of a five-centuries-old tune.

After posting the audio file to her blog, she’s surprised by the online response—over 200,000 plays, inquiries from around the world, and an interview with Anderson Cooper of CNN. Everyone wants to know—is it true that Amelia is the first to ever play Bosch’s song? It seems likely, at least to Oklahoma Christian music professor, John Fletcher. “This is a well-documented painting. I thought someone might come forward with doctorial research, but interestingly, nothing has surfaced in the weeks since this has been publicized,” said Fletcher.

Although Amelia accidently stumbled onto this discovery, Fletcher isn’t surprised because of all the factors influencing her. “Both of her parents were students of mine, both music majors who now work as research librarians. Amelia is my first second-generation student,” Fletcher said. “Considering her upbringing in a research-oriented family, it’s natural for her to explore something like this.”

It does seem that a rare combination of circumstances came into play that night while studying. After all, how many students have a double-major in music and information sciences—oh, and have a father with a doctorate in musicology who specialized in music from the 1500s? Amelia noticed right away that the musical notes in Bosch’s painting looked different from modern music. She felt confident that they were written for Gregorian chant, a form of early religious music. Her conclusion rang true with art historian, Delaynna Trim, curator of collections at the Mabee-Gerrer Museum of Art in Shawnee, a museum begun by an art-collecting monk. “Although most musical notation was seen in churches, that style was starting to show up in paintings during the late Middle Ages.” 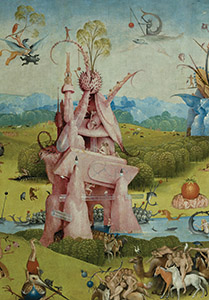 The Bosch painting, named “The Garden of Earthly Delights,” is filled with nude humans and fantastical creatures engaging in a variety of activities. Painted around 1500 AD, it is speculated to be either a narration of creation or a commentary on social temptations. “Bosch included little details and symbolism typical to the time period,” Trim said, “But he added in, shall I say, crazy stuff.”

Amelia describes it in modern terms as a “Where’s Waldo from 500 years ago.” She wonders if Bosch was being symbolic or just being weird. “I’d like to clear that up and learn if those notes are an actual song significant to the painting, or if we’re reading too much into his painting.”

Unsurprisingly, Amelia is already looking ahead to her senior project and is hoping to transcribe the other musical notes from the painting, albeit they are found in less interesting places. “This is a fresh discovery that’s only a few weeks old,” Fletcher said. “Amelia’s transcription caught all of us off guard in the midst of a semester. We haven’t had time to research this yet.”

Amelia, who is finding great humor in the uproar, finds it particularly funny to hear the university’s highly-respected professors discussing the man’s naked rear end in her classes. Other students at the university have already found creative ways to expand upon the music, such as a choral arrangement with “interesting” bare-bottomed lyrics, and the idea of creating a sweat band version of the song to play at basketball games, although the tune is fairly tuneless.

According to Amelia, “The first thing I thought was, ‘This is a really bad Gregorian chant.’” She speculates that the notes might have been randomly painted for their looks, not their musicality. However, the song has gained cyberspace fans who have begun recording their own versions, including one sung in actual Gregorian chant. For Amelia, she’s unsure if this historical discovery is going to have a long-term effect on her life, but it has made the semester exciting. “It’s a little overwhelming to be goofing around and accidentally making a historical discovery.”

The question remains, did Bosch intend this now-internationally-famous song to ever be played? It’s too early to tell, but Amelia might be the perfect person to get to the “bottom” of this 500-year-old mystery. She can certainly take credit for bringing this posterior story to the forefront. 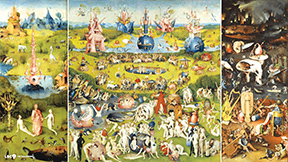 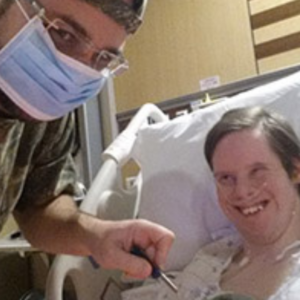 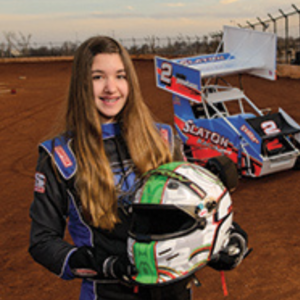