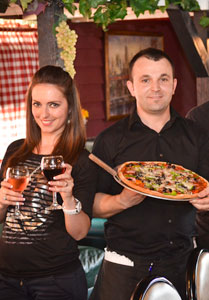 The Roma family has brought one of the best parts of Italy to Guthrie — the delicious food. Born in Milan, Italy, brothers Nick and Evan Roma own and operate Roma’s Italian Restaurant, 1202 S. Division Ave., and with the help of spouses, siblings, cousins and friends, they bring true Northern Italian cuisine to Central Oklahoma.
Nick’s family moved to the United States’ West Coast more than 15 years ago. After several years, they tired of the fast pace of coastal living and relocated to Oklahoma for a quieter life. “It was a good change,” Roma said. “And now Oklahoma is home.”

The Roma family had been in the restaurant business for many years when Nick and Evan decided to open Roma’s Italian Restaurant in Guthrie in 2009. They now have another location in Cushing, mostly operated by Evan. “We worked in the restaurant industry for a while and we were pretty good at it, so we decided we might as well do our own thing,” said Nick.

Casual Italian décor, complete with rustic cedar beams and red and white checkered window treatments, provides a charming, welcoming ambiance, but the real draw and focus of the establishment is its fragrant cuisine. Nick arrives at work hours before the restaurant opens for lunch, and gets started preparing the marinara sauce from scratch, giving it time to simmer for hours.

“Our marinara sauce is the best — not too spicy, not too sweet, not too sour, not too bitter,” Nick said. The marinara recipe has been in his family for generations. “People try it and they are stumped. They don’t know what to say. It’s a perfect blend.”

While the sauce simmers, Nick makes the dough for the pizzas — which eventually will be baked in a brick oven — and for the homemade rolls that are served to every table. The first batch comes out of the oven five minutes before lunch time and new batches are made throughout the day as needed. Nick does much of the cooking personally, as does Evan. “Me, Evan, the cousins … just about everyone in the family helps out in the kitchen sometimes,” Nick said.

Roma’s extensive menu includes oven-baked stromboli, calzones, fried calamari, fresh bruschetta, salads, and desserts such as cannoli, tiramisu and Italian ice creams. But the stars of the offerings are the pizzas and homemade pastas. Traditional ziti, spaghetti, ravioli and lasagna are taken to a new level with the freshly made sauces. In addition to the marinara, homemade Alfredo sauce, and another sauce that combines both Alfredo and marinara, are used throughout the menu.

“The Roma (Special) Combo is like a tour of Italy itself,” said Nick, who often refers new diners to this sampling of fettuccini Alfredo, lasagna and chicken parmesan.

Eating at Roma’s is like eating at the Roma family table. “We make you feel at home,” Nick said. “And once you’ve eaten here once, you’ll be known the next time.”