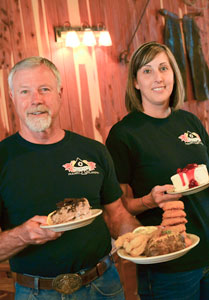 The ‘good ole days’ often evoke thoughts of a time when life was easier, slower; when exercise was defined as hard work, entertainment didn’t require remotes and country was a way of life. Although the 21st century has brought advancements that few Oklahomans would trade for the past, many enjoy a taste of it when they visit

Proprietors Don and Chris Harman, Mulhall natives, revived the restaurant after a fire destroyed it in 2009. “Before the fire, Lucille’s was an icon and a business in a town of less than 300. The previous owner had no desire to rebuild but knew the town needed something,” said Harman.

Endeavoring to keep the history that made Lucille’s an Oklahoma landmark, the restaurant opened across the street from the original site. “The 1894 bank building had been the restaurant’s bar so we kept the old teller window for our bar and the traditional western flavor complete with old cowhides, Native American war bonnets and old pictures of Pistol Pete,” said Harman.

Perhaps the most interesting piece of history in the new restaurant is the menu. “Our menu is the identical menu of Lucille’s before it burned, including the prices. The economy makes us change from time to time but we’re fighting to keep it the same so people can come back and see things from a simpler time,” said Harman.

Lucille’s menu boasts of burgers, steaks and fried chicken that customers comment “is the best around,” according to Harman. “My favorite is the breakfast buffet we have on Saturdays and Sundays with fried potatoes, three kinds of eggs, French toast, sausage, bacon and homemade biscuits.”

Another delight are the homemade pies and cobblers that Harman says “are strategically located right when you walk in the door.”

If great food wasn’t enough to draw a crowd, their monthly events are. The first and second Saturday of every month, Lucille’s hosts a classic car show and motorcycle poker run consecutively. Crowds upwards of 500 enjoy live music and old fashioned street dances. Fridays in May, Lucille’s has old cowboy music with guests like Jim Garling.

While Lucille’s history may entice some to visit, the atmosphere and food keeps them loyal. “Lucille’s isn’t a franchise; it’s a one-of-a-kind destination. I know it’s poetic but it’s where people go to get away from the big city stress and listen to the quiet,” said Harman. “Also, we have some of the best food and service around.”