FOOD: All About That Baste 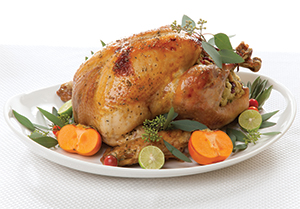 What is it about those first years of marital bliss that embolden young brides to want to host the big family holiday dinner? A rite of passage?  A declaration of womanhood? Sheer naïveté? Whatever it is, it’s powerful—and not always pretty.

My first foray into holiday hosting left me humbled. After hours of cooking my prized turkey, wondering why the all-reliable timer hadn’t popped up, I was distraught. Sweating profusely and trying to be charming over small talk at the relish tray, my husband came to my rescue. He ingeniously turned the turkey over and realized I’d cooked it upside down. Leave it to an engineer to save Christmas. Luckily, the turkey was delicious, even if I was scarred for life.

Turns out, we domestic novices aren’t the only ones fumbling with timers and turkey basters in the quest for picturesque holiday moments. Even the pros have botched a dish or two in their day. Though we live in an age when we can Google anything and tap our culinary genius with a mere click, no meal is fool-proof. In my defense, there was no Internet, no Google and no cell phone to help me through my first homemade holiday dinner. Thank goodness there was wine.

Grab a cup of coffee, sit back and relish the menu highlights and mishaps of local chefs who, likewise, have had their share of holiday cooking moments to remember.

Debbie Mills makes to-die-for desserts at The Meat House in Edmond. One year, as she made truffles for her home holiday dinner, she left the spoon in the chocolate and went about multi-tasking. Returning later to the kitchen, the spoon was solidified in the block of chocolate. She broke the spoon trying to remove it and hasn’t made truffles since. Her specialties now are bon-bons and rum balls.

Owners of two Colby’s Grill locations in Edmond, Colby and Jessica Mason are known for their show-stopping home style breakfasts and lunches. The honor of the family holiday cooking, however, has so far stayed with Colby’s mother, who Jessica admits is a wonderful cook. “However, it is her tradition to burn the first batch of bread for the dressing. Happens every year!” Jessica giggles.

Seems the breaking of bread often begins with the burning of bread in many families. Owners of Edmond’s renowned Twelve Oaks Restaurant, Gregg and Lisa Janes recall that their family repeatedly forgets to pull the bread out of the oven each year. Gregg’s mom used to scream out, “The bread! The bread! The bread!” Now the whole family joins in the chorus each year when the bread is discovered. Another tradition is “the family’s informal dinner on Christmas night, complete with Lisa’s killer chicken chili,” Gregg says.

Debbie Lowery, owner of Running Wild Catering, oversees the preparation of more than 500 turkeys in November, yet still loves cooking one for her own family. Her Aunt Dorothy’s Chocolate Ice Box Pie, a secret recipe even the kids don’t have, is also a holiday mainstay. Lowery once taught her sister-in-law how to cook a turkey. Everything was done beautifully but as they cut it, they realized she’d left the giblet bag in the cavity. The melted plastic bag made the turkey completely inedible!

Black-eyed peas are more than a token of good fortune on New Year’s Day at the home of Vance Gregory, owner of Edmond Wine Shop. They’re an attraction, prepared Hoppin’ John-style from recipes like those of Ree Drummond or Emeril. One year, the family accidentally doubled up on the cayenne and no one but Gregory’s wife could eat it. “Her father is from Sri Lanka and when she’s asked at a Thai restaurant how spicy she wants her dish, from one to five stars, she always replies, ‘seven,’” Gregory remarks.

Lottinvilles’ chef, Meliena Martin’s favorite non-traditional holiday dish to make is Crab Rangoon. “I usually prepare it as an appetizer but it ends up at the dinner table every year,” Martin says. Chicken Alfredo and Rice Pilaf sometimes make appearances as well. A few years ago, Martin made cherry cobbler and apple crisp, but hadn’t labeled her ingredients and accidentally used salt in the recipe instead of sugar. “Needless to say,”Martin concedes, “everyone was in for a savory surprise when they got to what was supposed to be the sweetest part of the meal!” Since then, she’s labeled everything but her family hasn’t let her live it down yet. 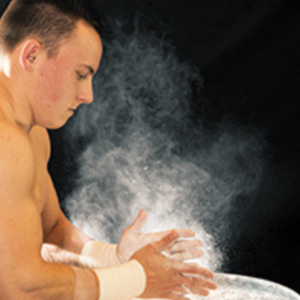 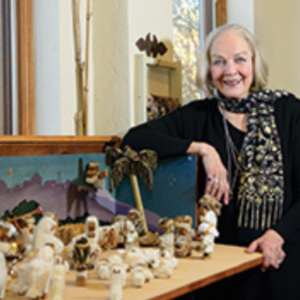 My Outlook: Pat Darcey, Creator & Owner of With Joy Nativities