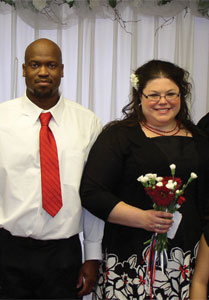 Today we live in a world consumed with money. Whether it’s the desire for more or the satisfaction of having it, money haunts us. And what we fear most may be not having enough to make it.

The employees at Vox Printing know that fear. In fact, they overcame it. A sister company of Edmond’s Reid Printing, Vox gave its employees a gift that would prove invaluable: a financial education with Dave Ramsey’s program, Financial Peace University.

Vox had heard through the grapevine that its employees were struggling, living paycheck to paycheck. “People bring their stress to work and money is stressful,” says employee Jena Walla. Walla had heard of Financial Peace University, a program designed to educate people on money matters such as getting out of debt, saving for unexpected costs and retirement, to name a few.

Soon, the company’s employees were offered the 13-week course, courtesy of Vox Printing. In addition, they would even provide a bonus for those who graduated. The program started in November because the company hoped its employees might get a jump on the Christmas season.

Financial Peace University is primarily taught in churches all across the nation. Students are given videos to watch which correspond with lessons from their workbooks. Instead, Vox hosted the program right inside their facility, during the 30-minute lunch break. With a convenient location and tailor-made schedule, it was difficult for employees to say no. “We were hoping for at least 10 of our 50 employees to participate in the program,” says Vox president David Reid. “We ended up with 21 employees graduating.”

Leading the program was Brenda Cannon, a CPA who volunteered her time to spread Dave Ramsey’s words. Having undergone the financial education herself and achieving financial freedom, she wanted to find a way to give back. “People are so misled (about money),” Cannon says. It wasn’t long after she and her husband took the course that he was able to quit work for two years to go back to school.

The inspirational stories go on from there. Vox employee Heather Patton had been planning her wedding before the opportunity with Financial Peace. She considered the program a perfect solution to not only save extra cash for the wedding and honeymoon, but begin a new life with her husband and have a fresh financial start. Patton and her fiancé were hoping to make it out of the wedding without giving in to the temptation of loans or credit card purchases and upon her graduation of Financial Peace, the two succeeded. “Everything was paid for in cash. We came back with no debt,” she says.

The couple started by setting a simple goal to fill a change jar by their wedding day. They also began isolating some of their money into an emergency fund, the first of Financial Peace University’s “Seven Tips for Financial Peace.” Patton says she appreciated the layout of the course, since her husband was able to join her in the lessons, making them easier to apply to her daily routine.

She admits to having financial preconceptions that were shattered after completing the course. Having paid a home warranty for the past four years, she often wondered if the money would be put to better use. After all, these warranties are sometimes not used at all and often the damage done is not even included in the warranty. Patton, with her newfound knowledge, used her cash savings to make repairs, leaving the idea of a warranty behind.

When asked if she would recommend the program to prospective students, Patton eagerly confirms she would. If people could only start out with this kind of knowledge, she explains, they would be far better off. “I had to learn the hard way,” she says.

Though money concepts and lingo can seem confusing, it doesn’t have to be. With easy-to-understand lessons and relatable stories, Financial Peace University provides the tools for financial success, as long as the steps are followed. And with a support group of peers there for every meeting, there is less chance of falling out of line. “Having that accountability helps so much,” said Cannon.

Though nearly half of Vox Printing employees found success in the program, there were still others who came to regret not participating. Walla recalls some having admitted they did not sign up because they believed the class to be aimed toward only the debt-ridden. Walla said this is simply not the case. “(Financial Peace) is everything money from A to Z.”

With principles targeting every financial status, the message of Dave Ramsey’s program suggests that everyone, no matter their level of debt or salary can find financial freedom. Walla relates, saying having her own student debt to overcome drives her to ensure that her children will not meet the same fate. And perhaps this is the overlying lesson to be learned: It is never too late to correct your mistakes. It is never too late to change.

In this regard, Vox is already planning future collaborations with Financial Peace. Having given their employees a means to end their stressful financial burdens, they are excited to see their employees able to focus more on their jobs. “We always tell our employees to smile when they answer the phone because people can tell,” said Reid. “Now they have one more reason to do so.”