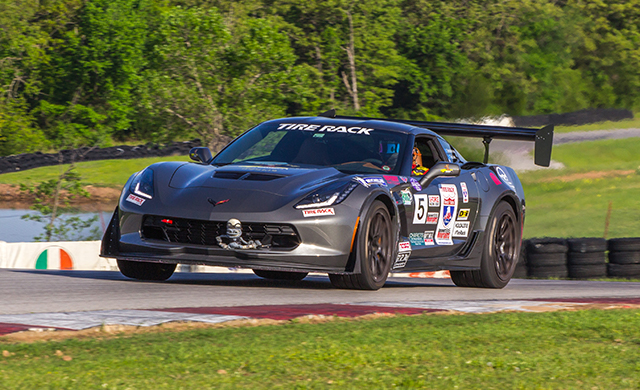 Slow and steady may not win every race – but perseverance and a love for cars helped Chris and Tina Lewis win the 2018 Tire Rack One Lap of America.

They say that dedication and determination will take you a long way. For Chris and Tina Lewis, winners of the 2018 Tire Rack One Lap of America, it was 5,712 miles, to be exact.

That’s how many miles they put on their 2015 Corvette Z06 over the course of eight long days and nights, driving across the country to racetracks so that they could drive some more.

The One Lap began as a continuation of the Cannonball coast-to-coast race, from New York to California, in the 1970s. The race changed and evolved over the years to its current form. This year, the One Lap began in South Bend, Indiana, at the Tire Rack Wet Skidpad, where competitors kicked off the event by racing around a track wetted by sprinklers, with the fastest time earning the most points. Then, the “lap around America” took competitors to Chicago, St. Louis, Tulsa, Denver, Plano, New Orleans and Bowling Green, before circling back to South Bend.

“You pack all your stuff that you need for that whole week in one car. You can’t take a truck and trailer. It’s you and another person, in a car,” said Chris Lewis. “You only get one set of tires.”

“The whole thing’s about endurance,” Lewis said. “When you’ve got to leave out of Denver late in the afternoon, and you’ve got to drive 750 miles to get to your next location, you don’t get a whole lot of sleep.”

Lewis said the race was a team effort with Tina, his wife, who journeyed with him across the country, coordinating and organizing the trip for maximum efficiency.

In many ways, the Lewises’ victory was a culmination of years of work and dedication, all stemming from a passion for automobiles and a family connection. Lewis said he’s always been a “car guy,” competing in autocross in high school before moving on to go-carts and racing cars on tracks.

After fifteen years of racing competitively, Lewis got involved in the One Lap because of his late cousin and business partner, Mike Hedin, whose birthday happened to fall on the start date of the competition. He decided to participate in the 2012 One Lap, and invited Lewis along. They ended up winning the sportsmanship award for helping out others along the way, and they kept coming back.

Hedin passed away from small cell lung cancer at the age of 43 in January 2014. Lewis continued racing to honor Hedin’s memory and out of his love for the sport. Each year, he showed up, dedicated and ready for the grueling, exhilarating week.

“We’ve been doing it for the past four years, never with the thought that we were going to win this thing,” Lewis said. “But we kept getting faster and faster.” After taking an early lead after doing well in the first and second races, Chris and Tina kept up their momentum. “We had these big horsepower guys that were coming up on us really quickly in the points,” said Lewis. They were competing against high-horsepower, high-dollar cars, but the “stars aligned,” and victory was theirs.

For Lewis, the win brought disbelief. “There’s something about being out there doing this day after day after day for a week that you just can’t put into words,” he said. Lewis doesn’t plan on stopping the One Lap anytime soon. “Once you get hooked on it, you do it for life.” he said.

Lewis’ advice for first-time competitors? “Go do one, but don’t plan on being competitive the first time. Go do it in whatever you’ve got… just to see what it’s all about,” he said. Slow and steady might not always win the race, but dedication, perseverance and a little bit of luck just might.