Edmond on the Bay 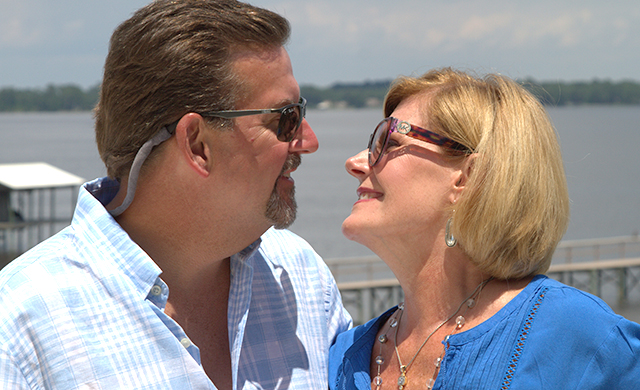 HGTV’s Edmond on the Bay

The search for a vacation getaway turned into a television adventure for Brent and Patrice Douglas. As the two searched for their perfect waterfront property in Fairhope, AL, an eight-person crew from HGTV followed them around. The Douglases are no strangers to a viewing audience. As a business consultant, Brent regularly speaks to large groups and Patrice was the Mayor of Edmond from 2009 until 2011, but reality television was a fun new experience for the couple.

“We’d already been looking for a house in Fairhope when our realtor called and said that HGTV wanted to feature the community in an episode,” Patrice said. “The realtor suggested us because she knew our backstory.”

Patrice had hand-picked the Fairhope area because it was named as a 10 Best Towns for Families by Family Circle, an honor also held by Edmond, OK when she was mayor. Patrice once lived in Alabama, and she had strong memories of visiting Mobile Bay with her dad. She convinced Brent to take her there, and they found the community to be quaint and friendly. “It felt like Edmond on the Bay,” Patrice said.

Filming for reality television, however, turned out to be quite different from filming political commercials, as was their previous experience. “We worked three 12-hour days,” Patrice said. “And you have to be careful what you say when you’re wired to a mic for 12 hours a day! In one house, we were just goofing off. Brent tackled me on the bed and said, ‘Wow, honey.’ They immediately asked us not be so racy.”

Although the Douglases laughed about that, they highly praised the crew as organized and professional. “They called us ‘the talent,’ which cracked us up,” Brent said. “I’d ask for a bottle of water, and they’d put a piece of tape with my name on it. It made us feel a bit like movie stars.”

For every scene that made it onto the show, Patrice and Brent had reenacted it at least three times. They had to mimic their initial reaction so it could be filmed from different angles. Filming in the bathroom posed the greatest challenge, because of the tight space and mirrors. “The cameramen were trying to stay out of view, so they would run into the bathroom and dive behind the shower curtain, or they were ducking underneath you,” Brent said. “It was hard navigating like nothing was going on, especially when they were under your feet.”

Outdoor filming also posed challenges. Lighting was a constant challenge, as the sun would go behind a cloud at just the wrong moment, and the beach backdrop was unpredictable. Boats roared past and interfered with sound levels, and beach visitors unintentionally caused noisy distraction.

Ultimately, the Douglases selected one of three vacation homes that best met all their requirements: a quaint community, a location their adult sons would enjoy visiting, and a site facing the bay. What made their final decision? “The view,” both said in unison.

“The house isn’t fancy, but it has huge windows with an unobstructed view of the bay,” Patrice said. “Oklahoma sunsets are gorgeous, but you should see them at Fairhope.”

The Douglases wanted the Edmond community represented in their vacation home, so they decorated the interior with art purchased from last year’s Edmond Art Show. “If you watch the episode—you’ll see it on our walls,” said Brent.

In the end, 150 hours of filming was boiled down into a 23-minute show. Patrice only regrets that the photographs of her late father didn’t make it into the show. “He first took me to the beach in Mobile Bay, so that’s one of the sentimental reasons for living there–but coincidentally, the show aired on November 5th, my dad’s birthday, so that meant a lot to me.”

The Douglases can be seen on the “Alabama Gulf Coast Getaway” episode of HGTV’s Beach Hunters, which first aired Nov 2017.