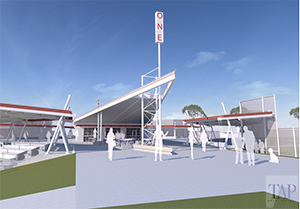 Cooperstown, New York, may lay
claim to baseball in the United States, but Oklahoma City will always be the
national headquarters for softball.

It’s the home of the National
Softball Hall of Fame. It’s the home of the Women’s College World Series. The
Sooners are the national champs (again). Oklahomans love softball, and Edmond
is giving its players a new, world-class facility—the Edmond ‘66 Softball
Park—for their favorite sport.

“We’re totally excited about the new fields,”
says Jacky Muse, President of Edmond’s Adult Softball Association (ASA). “The
fields are the best in town, and the facility is better for players and
spectators. And the Route 66 theme is awesome. It’s time to play ball.”

Scheduled for completion by September,
the complex sits at the intersection of Route 66 and Post Road, a stone’s throw
from Arcadia’s POPS. It will replace the aging Bickham Park which is the home
of the ASA and its 1,500 members. Almost 30 years old, Bickham Park can’t meet
the growing demand for softball in Edmond. Its concession stand isn’t built for
crowds and its lack of bathrooms, water fountains and other amenities challenge