Down On Your Luck in Oklahoma

When Trish Ferguson of Edmond was granted custody of her two granddaughters, she found herself in a tough situation. She didn’t own any baby items, baby clothes or even diapers and formula.

With six children in the home, the Fergusons were already living on a tight budget. Baby items are expensive, and Trish simply didn’t know where to look for help. She turned to Facebook, asking for ways to get items for her new babies. 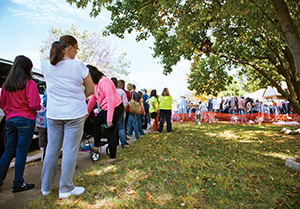 “A friend told me about this group called ‘Down on Your Luck in Oklahoma’ on Facebook,” Trish said. “I posted that I needed baby items, and within days, I had baby clothes, diapers, a case of formula and so much more. That’s when I got hooked. I knew I wanted to be a part of this community.”

For Oklahomans who are seeking help or for those who want to give items away to a worthy cause, the community Facebook page called “Down on Your Luck in Oklahoma” is filling a need. Though she wasn’t an administrator yet, Trish said she wanted to “pay it forward,” so she sorted through everything her kids had outgrown and offered it on the site.

Less than six months later, she—along with fellow administrator Laura Williamson—now runs the page which has more than 9,500 members intent on receiving, trading, giving or offering items to those in need. The rules are simple—no buying, no selling. Everything is freely given. Everyone pays it forward.

“I know what it’s like to be down on your luck and need help. At one point, everyone needs help,” Trish said. “We all are passionate about what we are doing, and it’s an amazing thing. You find that the people with the least to give end up giving the most.”

DOWN ON YOUR LUCK

The “Down on Your Luck in Oklahoma” Facebook page was originally started by Oklahoman Brandon Vandagriff. When Ferguson and Williamson joined, the group had less than 100 members. In mere months, that number jumped to more than 600, and the group today has more than 9,500 members.

For the ladies who run the site, Down On Your Luck in Oklahoma is a labor of love and one that takes time and money. They are responsible for pick up and delivery of donations, and many times, they use their own money to get items like diapers, formula, shelving and strollers.

The number of community members for Down On Your Luck in Oklahoma keeps growing. In the past three months, the needs and donations grew so large that the group started hosting distribution days at Trish’s home.

In September, more than 150 families arrived at what looked like a giant garage sale to select items they needed. In October, the line of people weaved down the neighborhood and cars choked the residential street.

“We are learning as we go,” said Trish. “We give one large bag for clothes, for every four members of a family, but that doesn’t include bedding, strollers or things like that. People have taken advantage, but we are constantly improving the process.”

“But we do so much more,” Trish said. “We have helped homeless people get into shelters. We have helped people with job interview clothes. We have a resource list for those needing help with bills. There’s just so much need out there.”

Currently, Down On Your Luck is asking for donations to secure a permanent storage and distribution facility, and eventually, they need legal assistance to become a 501(c)3. Until then, however, the group refers to itself as concerned citizens trying to help each other out.

“That’s the whole spirit of the site,” Trish said. “I can’t even begin to count how many people have been helped. The people on this page are awesome, they want to help other people and people who don’t have the money to give are still helping because they know what it’s like to struggle.

For more information about Down On Your Luck in Oklahoma or to donate, visit www.facebook.com/groups/DOYLIO 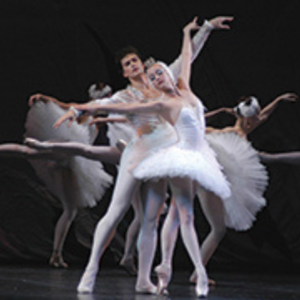 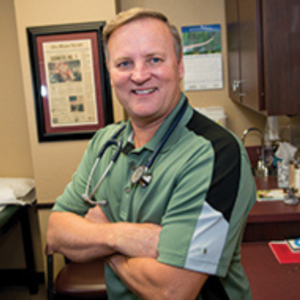 by Kristi Eaton
Ask Dr. Carl Limbaugh about his patients and you'll see what commitment and service are all about. A trusted member of the Edmond community, Dr. Limbaugh is a family practice physician with the OSSO Healthcare Network"���providing care for patients ranging from newborns to seniors.
Read More  >