Dino Lalli is a born storyteller.

With his open face and sincere humor, it’s easy to see why celebrities like Robin Williams, Clint Eastwood, Harrison Ford, Tom Hanks and William Hurt found the Okie boy so easy to talk to. It’s easy to see why Eastwood and Williams would singularly request Lalli for interviews and why, with more than 25 years of entertainment reporting and news under his belt, Lalli keeps growing and adapting. 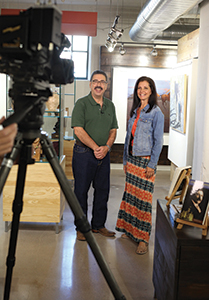 “You know, I realize we aren’t curing cancer here, but every story you do is important,” Lalli said. “I tried to make it fun—for me and for them. I remember to be thankful for getting paid to do a job that I love to do.”

From humble beginnings as a child obsessed with films and movies in McAlester to entertainment reporting for Oklahoma City and Los Angeles television stations to becoming the host of the iconic Discover Oklahoma series, Lalli has never stopped working in the field he loves.

Now, with the 1,000th episode of the Oklahoma Tourism and Recreation’s Discover Oklahoma under his belt, Lalli is reinventing himself again as an independent video production company, a documentary film producer and a public speaker.

“I grew up with my father’s work ethic. Dad died a day before his 92nd birthday, and he loved to work. He was at work days before he died,” said Lalli. “He always told me, ‘No one is going to outwork a Lalli.’ I’ve always remembered that.”

Little Dino was born in 1956 in a log cabin in McAlester, and even as a boy, he was fascinated by television and movies. His earliest memories were of watching John Wayne on film and reveling in the magic of how movies made him feel.

After graduating from the University of Oklahoma School of Journalism with a radio and television broadcasting major, Lalli scored his first job at Oklahoma City’s Channel 5. He made producer in less than a month and then was tagged as host and reporter for a show called News Reel.

Through the next 20 years, Lalli worked first for various news stations across the country. But he’s perhaps best known for his work interviewing the biggest movie stars as an entertainment reporter.

“I was never really nervous. I was excited to interview movie stars, but I wasn’t star struck,” said Lalli. “I did my homework, and it was a job. I think I’ve been more star struck by astronauts.”

Lalli became friendly with stars like Tom Hanks, Julia Roberts and other celebrities. He found something special in each one of them.

“Tom was just a wonderful, down-to-earth guy,” he said. “Julia Roberts was a sweetheart. I developed a fun friendship with Robin Williams. He would call the studios personally to make sure I would be there when he did press.” 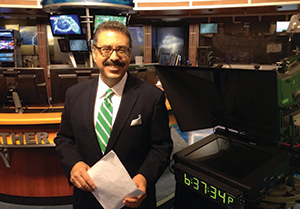 alli also interviewed Clint Eastwood when the movie Unforgiven was released. He called Warner Brothers to score an interview with Eastwood, and spent 10 minutes with the screen legend. Apparently, he made an impression because a year later, Eastwood’s people requested “that kid from Oklahoma” as one of only eight interviews Eastwood was doing for his new film.

“They said, ‘Clint requested you,’” said Lalli. “That was an honor. I think it’s because I put them at ease. I let them know I am a fan of filmmaking and I am sincere. I never ask them personal questions either.”

To this day, he still makes television appearances, either speaking about Discover Oklahoma or talking film. Sometimes, he’s even on two stations at the same time.

“That scenario is certainly an unusual situation, but one I don’t take lightly,” he said. “It doesn’t happen that often, but I’m very flattered and lucky to have been around long enough to have this rare opportunity.”

Now, Dino is starting a new chapter in his book of adventures. Besides starting his own video production company, Clever Name Productions, he’s also actively working in public speaking, emceeing and filmmaking. Dino is already starting work on another project as an associate producer, Remember the Sultana. “The USS Sultana was a Mississippi River side wheel steamboat that exploded on April 27, 1865 in the greatest maritime disaster in United States history,” Lalli said. “Very few people have ever heard about it though.”

“The most rewarding thing is to be able to work in an industry that I love and to be able to continue to work in the areas that I truly love,” said Lalli. “It’s true when they say that if you love what you do, you’ll never work a day in your life.”

by Amy Dee Stephens
For Coffee Creek Church, Easter Sunday is the prelude to a service project that will provide 15,000 meals to hungry children.
Read More  >