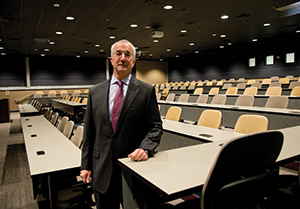 What do you get when you hire a former FBI agent as the director of your school? A teacher with real world experience who will turn the classroom into a crime scene case study. Dwight Adams, PhD, is a different type of college director. With over 23 years of experience, he doesn’t just rely on a textbook to teach his students about the key elements of forensic science. It’s this kind of out-of-the-box teaching style that is quickly making the University of Central Oklahoma’s W. Roger Webb Forensic Science Institute one of the best in the nation.

Walking into the 35,000 square-foot institute can be a little intimidating. The huge doors lead you directly into a large atrium. The UCO seal is centered on the floor and the high ceilings make the building seem even larger. While the environment might seem vast and daunting, Adams and his friendly staff make the larger-than-life space feel like home. The atrium is an important part of Adams’ daily routine. Instead of using his office to talk to students, he finds a spot in the atrium for students to come and share their problems and concerns. It’s just another aspect of his appeal as director. “Our faculty is accessible to the student,” says a polite Adams. After spending time with him, you come to realize that this isn’t just a statement, but a foundational principle on which to build the legacy of the institute. In areas where regular professors may exhibit their degrees or plaques, Adams uses the wall space to display pictures of the laboratory and field work that made his time with the FBI resemble something from an episode of CSI. 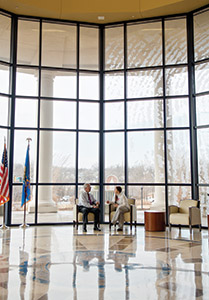 “I retired as the Director of the FBI Laboratory in 2006 in order to come back to my Alma Mater UCO to start the Forensic Science Institute,” says Adams. Director Adams accomplished a number of major milestones during his tenure with the FBI. He’s testified as a DNA expert in federal, state and local courts more than 130 times and his research played an integral role in the 9/11 investigation and the following anthrax scare that stunned the nation. “The anthrax case was a seven-year-long investigation and it was science that solved that case.” Adams says that what he remembers most about his work on the anthrax case was the outcome. “That is a satisfying result to know that you’ve had an impact on something of that magnitude,” says Adams. While he was receiving national acclaim for his work with the FBI, UCO’s former president was busy encouraging Adams to bring his expertise back to the University that started his prolific career. “President Webb spent four years recruiting me while I was still in the FBI,” he says. While he never openly revealed his hopes for the school, Adams says he always knew that President Webb had high expectations. “I believe that he wanted to make this the finest forensic science program in the country,” he says. “I think we’re well on our way to accomplishing that goal.”

However, it would take a lot more than just Adams to reach that goal. Not only does UCO now house one of the nation’s greatest forensic scientists, but the school has also opened its doors to a number of Adams’ former colleagues.  “Our faculty has almost 300 years of forensic science and law enforcement experience and it’s hard to match that kind of expertise anywhere else in the country,” says Adams.

A Future in Forensics 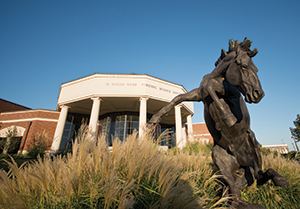 Students are already enjoying the benefits of having former FBI agents as professors. The students aren’t just getting an opportunity to learn from the best, but they are also getting to use the same equipment that’s being used in the world’s major laboratories. Adams is most proud that a large number of students are making successful transitions into their professional careers. Currently, 94 percent of the master’s degree-seeking students are finding success in their career fields.

While the popularity of shows like CSI and Bones are great recruiting tools, Adams says that any student considering a higher education at the school should be prepared to work. “Look very carefully at UCO,” he says. “Keep in mind that we require more of our students than any other program in the country. We put the reality back into forensic science.”

For more information about the Forensic Science Institute at UCO, visit uco.edu/forensics. 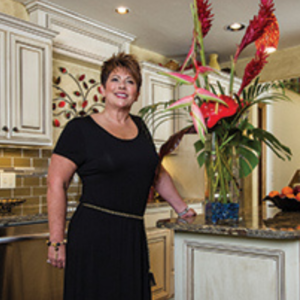 by MA Smith
Living by the motto "If You Can Dream It, We Can Build It,"�� employees at Heritage Renovations excel at providing the best service, while also having a little fun.
Read More  > 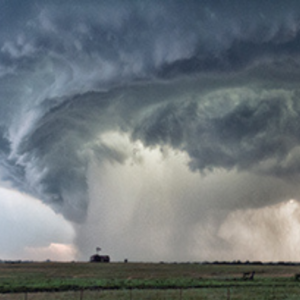