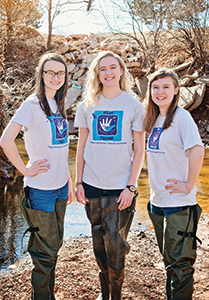 Remember forming a club as a child? Maybe you and your friends had a special handshake or secret meeting place. Meet three girls who started the “Hedgehogs Named Bob Who Like Pie” writing club as children. Now, these teenagers are still together, making a big impact on the environment, writing award-winning hedgehog books, and teaching children the importance of clean storm water drains.

Sisters, Ariel and Ava McAffrey and their friend Katie Prior had hopes of writing books when they “grew up,” but never dreamed of having two acclaimed books about water conservation before they could even drive. The three formed a weekly writing club, along with a few other friends, nearly eight years ago. They also joined the Girl Scouts of America and started learning about the environment.

“They gave us a kit so that we could test water for things like chloride, ammonia nitrogen and dissolved oxygen,” added Ava, age 15.

“We started monitoring our neighborhood creek and assessing the physical habitat,” Ariel said. “We reported things like the amount of trash and water scum, if any fish were dead, as well as man-made changes—like when someone dumped a truck full of construction trash into our creek.”

“At first, we found a lot of trash and drinking cups people had thrown out, because our creek runs along a street,” said Katie, age 15.

“Now that we’ve been picking up the trash for so many years, there is less and less, so that’s cool,” Ava said.

“But then, we started getting some high chloride levels which indicated unhealthy water,” Ariel said.

“So we opened a case with the Conservation Commission and fortunately, they pinpointed where the chloride was coming from,” Ava said. As the girls learned about their own creek, they realized how few people understood the real purpose of storm drains. They surveyed 507 individuals, and the overwhelming belief was that anything poured into a storm drain went into a water treatment facility. Not true. Storm drains flow down into natural bodies of water.

“Any paint, motor oil, trash or fertilizer that goes down a storm drain floats into a nearby stream, pond or river,” Ariel said.

“We wanted people to know that whatever they’re dumping isn’t getting treated,” Ava said.

“So we brainstormed and decided to start by teaching kids to take care of the earth,’” Katie said. As a result, the girls wrote two books. The first one, Bob Has an Idea: A Story of the Three Rs, introduces young readers to the concepts of reduce, reuse and recycle. The authors wrote the book through a series of emails, selecting their club mascot, Bob the hedgehog, as the main character. Illustrations were created in Photoshop, and the girls published the book through Amazon CreateSpace, because the Metropolitan Library System will only accept professionally produced books.

Ever ambitious, Ariel, Ava and Katie next developed a website and recorded an audio book version of their story. They began a yearly tradition of volunteering at ScienceFest, teaching statewide fifth graders about how pollution runs downhill into a water source.

They also taught interactive library programs for children, which included a dress-up skit, songs, and crafts. The girls have used the proceeds from Bob Has an Idea to donate more than 150 books to libraries, environmental organizations and the children who attend their programs. 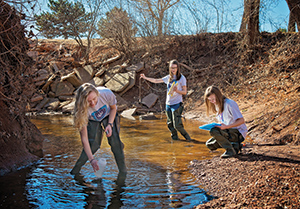 Not only did they earn the highest Cadette Girl Scout award for their project, the book received an Honorable Mention by the national Green Book Festival. Book two, Bob Has a Blue Thumb, was even more successful, winning the Purple Dragonfly Book Award and the Keep Oklahoma Beautiful Best of the Environmental Best Award.

“Winning ‘Best of the Best’ was definitely our most memorable moment,” Ava said.

“We were over the moon to even be nominated,” Ariel said. “We were up against amazing projects and lifetime achievements. When they announced us as the winner, we didn’t go right up to the stage…”

“…We just stared at the screen in shock,” Ava said.

The proceeds from Bob Has a Blue Thumb are donated to Oklahoma Blue Thumb, which has already exceeded $650. In the story, Bob teaches the importance of saving creeks from pollution and having a blue thumb, which means taking care of water. The authors practice what they preach, continuing to monitor their creek and mark neighborhood storm drains with official “Only Rain Should Go Down Storm Drains” logos.

“If anyone starts to pour something down the drain instead of the sink, that logo is staring at them,” Ava said.

According to Ariel, Ava and Katie, the response to their environmental crusade has exceeded their hopes. They frequently receive emails from inspired readers.

“My favorite fan letter is from a little girl who loves Bob,” Ava said. “She asks her parents to read the ‘blue thumb’ book every night. When she sees a storm drain on the street she says, ‘Don’t throw anything down the drain, Mom, it will kill the fishies!’”

All three girls believe their futures have been influenced by their volunteer projects. Ariel plans to pursue environmental engineering, Katie has her sights set on an illustration degree, and Ava, who has also volunteered 250+ hours as a junior curator for the Oklahoma City Zoo, is considering a conservation career.

“I was star struck when we published our first book,” Ava said. “It seemed unattainable—but now I’ve done it, it’s changed how I look at other problems.”

“Regardless of what I end up doing, I will always want to make a difference in my community,” Ariel said. “I’m proud we’ve made a lasting impression on the environment.”

To learn more or to purchase books, visit www.BobHasAnIdea.com. 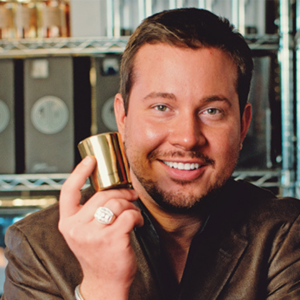 The Art of Making Scents

by Chloe Shelby
John David always wanted to start his own business, and his creativity led him to develop his own line of candles
Read More  > 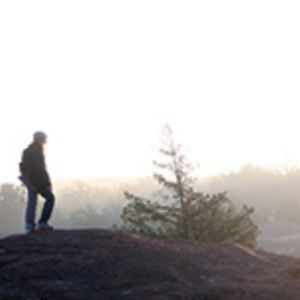 Hiking in the Heartland

by Heide Brandes
Whether going on your first hike or looking for a new challenge, here are three hikes guaranteed to satisfy your thirst for adventure
Read More  >