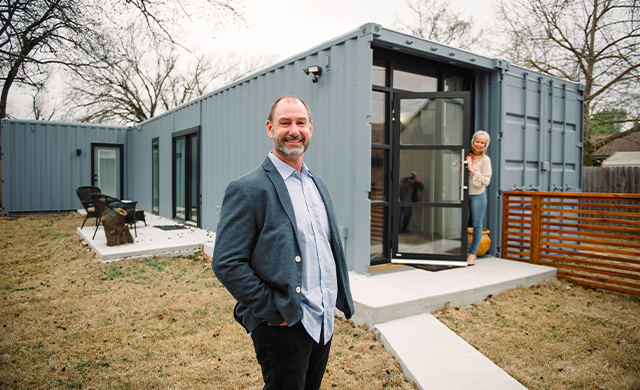 Realtor Greg Roberts has walked through a lot of houses over the past 25 years. He grew tired of seeing the same old thing. In an effort to move away from cookie cutter homes, Greg decided to think outside the box by building inside a box. Greg knows that home buyers want smaller homes with open layouts, they value energy efficiency, weather resistance, ample kitchen and entertainment space, and a bright and modern look. Years of knowledge and an idea that came about over dinner with his wife brought Edmond’s first container home to fruition.

The two-bed, two-bath home was crafted from three cargo containers, 40 feet wide, 8 feet long and 9 feet tall, bringing the square footage total to 940 square feet. Once the custom cut containers were in place, the construction of the home was similar to the process of a traditional home. From inception to completion, the home took two years to complete.

This home, located in downtown Edmond, has been the talk of the town. Among many fans, there have been a few naysayers. As with any innovation, there are some resistant to change. Greg didn’t feel discouraged by the few negative comments. There were concerns about curb appeal, but the home was approved by the powers that be. Interest in the home proved Edmond was ready for a container house. It wasn’t difficult to find a tenant to live in the container home. In fact, Greg says there were hundreds of people interested in the home.

Dr. Michele Menzel, a local naturopath, has taken up residence in the container home. She says, “Greg showed me a few houses and none of them wowed me. He said he had one more to show me and brought me to the almost completed container home.” Dr. Menzel enthusiastically walked in and said, “I’ll take it!” A huge fan of HGTV, she was familiar with container homes, but had no idea there was one in Edmond. She says it’s not all that different from a regular home. It doesn’t feel narrow or tight. She highly recommends container homes for those who enjoy simplicity and don’t mind people slowing down to admire your home as they drive by.

The container home building process produces far less waste than a traditional home. The home is extremely energy efficient. Greg laughed as he referred to the home as a giant yeti cooler. “We had to really focus on ventilation to keep it warm in the winter and cool in the summer.” Greg says the building of a container home costs about 90% of what a regular home with the same square footage would cost. Not surprisingly, the tenant has seen lower than average energy bills. The home sits on a concrete foundation and is resistant to up to an F1 or F2 rated tornado. The home is built to last and will stand the test of time in Edmond. Initial talks for a neighborhood of container homes or commercial development are underway.

The container house is located near the intersection of Hurd Street and Fretz Avenue. 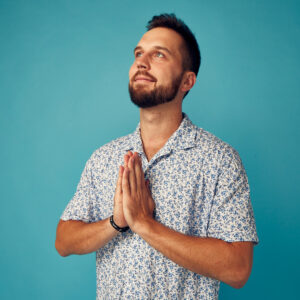 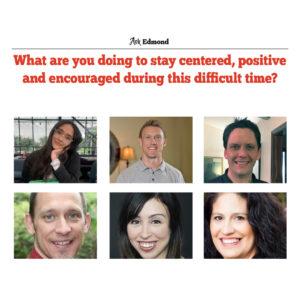 Ask Edmond: What are you doing to stay centered, positive, and encouraged during this difficult time?

by Edmond Outlook
What are you doing to stay centered, positive and encouraged during this difficult time?
Read More  >