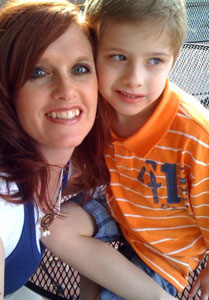 A nonprofit organization that started as a parent support group in Edmond is now helping hundreds of families affected by autism across the state. Autism Oklahoma offers advice and resources for parents of children with autism, as well as numerous social activities, including summer camps, teen, college and adult groups and an annual PieceWalk and 5K.

“We really try to focus more on the positive side of autism versus the negative side,” said the organization’s Director of Community Development, Crystal Frost. “We do try to change whatever the negative sides are and partner some of the positive with that to excel our community and our children.”

Ten years ago, organization founder Melinda Lauffenburger began meeting with another parent at the Edmond Library. More parents joined and soon the Edmond Family Center for Autism was created. Eventually the organization started similar groups in Oklahoma City, Stillwater, Muskogee and Canadian Valley. “Last year we redid our website and we renamed our organization Autism Oklahoma, which is so easy to remember,” said Frost. “And we just have been growing and growing.”

Frost joined Autism Oklahoma after her son was diagnosed with autism six years ago. She said one of the most rewarding aspects of being a part of the organization is giving back the support that she received. “The biggest thing with autism in general is that a lot of people still don’t know what autism is,” she said. “The grandparents don’t understand, so they just stop coming around or the aunts and uncles don’t help because they don’t know how. Or there is denial.”

According to the Centers for Disease Control and Prevention, autism, along with Asperger’s syndrome and Pervasive Developmental Disorder-Not Otherwise Specified (PDD-NOS), are a group of developmental disabilities that can cause significant social, communication and behavioral challenges. They are called Autism Spectrum Disorders or ASDs, because the symptoms range from mild to severe. Early signs of autism among infants include not making eye contact, not cuddling, not smiling back and not responding to their name. CDC statistics show that one in every 110 children in the United States has ASD. What causes it is unknown but specialists point out that early intervention is key.

“What we are trying to perceive and get out is that people with autism can have a bright future and they can do anything that anyone else can do. It’s just harder, because of their developmental delay,” Frost explained. “What we are asking is for every walk of life, whether it would be your church, your school, your college, your grocery store, your neighbor, anything, to just understand that we have to do things a little bit differently and that we need those partners.”

The organization’s mascot, Dash, who is a big red puzzle piece, is an essential part of all the activities. “It’s really hard for a person with autism to make friends, because they don’t know how to talk to people, or they are bullied because they act differently,” said Frost. “Dash is a friendly mascot that connects the community with people with autism. Hence, the puzzle piece, he is a connector.”

The various programs that Autism Oklahoma offers are designed to encourage social interaction and build confidence. The Summer Advance program, in partnership with UCO, helps young adults transition from high school to college. Students learn how to plan their schedules, go to class and live on campus. “That’s really hard for somebody with autism that hasn’t had to do those things,” said Frost. Camp Noggin is a summer camp for children with special needs where they can exercise and make friends in a safe environment. The Bee’s Knees program promotes self-sufficiency for young adults through developing entrepreneurial and business skills.

Autism Oklahoma has several awareness and fundraising events throughout the year. All of the proceeds are used in-state. “We’ve given over $85,000 in the last three years in programs and grants to the state of Oklahoma for the things that they need, whether it be education, research or the parent support groups,” said Frost. The organization’s biggest fundraising event is the annual PieceWalk and 5K that is set for May 5 in Bricktown. More than 5,000 people and 500 runners are expected to participate. The event will feature music, face-painting, games, food and a resource and vendor fair. “It’s a phenomenal day.”

Amy Archibald and her family regularly attend Autism Oklahoma meetings and events. Archibald’s son has autism. She said the network of parents not only understand the challenges of having a child with autism but also celebrate their children’s unique abilities and accomplishments. “Sometimes it’s easier at the end of the day to stay home and not have to explain to another person or not have to deal with the challenges that you can face being in public,” Archibald said. “Knowing you aren’t the only one and knowing you have a support system if you need it goes a very long way.”

Autism Oklahoma is planning to start additional support groups and hopes to reach more families, including those living in smaller towns. “We are a parent-led group, and we are here to raise our families together as a community,” said Frost. She is encouraging everyone to be open-minded, to volunteer and get to know a person with autism. “It would bless their lives in ways they never thought possible.”

For more information about the organization and how to get involved, go to autismoklahoma.org.