Changes Down the Road 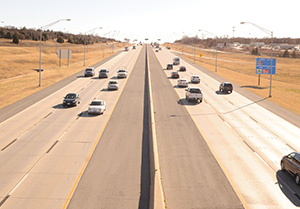 The new year will bring a rush
of changes to Edmond, and residents will begin to see the familiar landscape of
their city grow and morph as new developments and businesses bloom in 2013.

A prominent change will be the
Interstate 35 corridor that runs through Edmond from Memorial Road to Waterloo.
With its still-wild land and the challenges of installing infrastructure along
the hills of I-35, that area has remained largely undeveloped …until now. “I-35
has an eight-mile frontage that runs through our city,” said Janet Yowell,
Executive Director of the Edmond Economic Development Authority. “There hasn’t
been develop-ment there because a large portion of that frontage has no
infrastructure, like water and sewer.” That hasn’t stopped developers who are
looking to Edmond’s frontage as new land for new growth.

On the west side of I-35 between
South 15th and 33rd, Mercy Health Systems plans to open a 200,000-square-foot
facility on the southwest corner. Set to open in the summer, the facility will
include day surgery centers, doctors’ offices and a wellness center. “The idea
is that you are able to do physical therapy and see your doctor, all in the
same building,” Yowell said. “The wellness center will have an Olympic-sized
pool, sports medicine and all you’d expect in a workout facility.”

Like its neighbor across the
highway—Integris Medical Center—Mercy is making use of the natural landscape
and incorporating nature into the design of the facility.  Integris opened its doors in October 2011.
With the addition of Mercy’s medical offices, this frontage area will be a
wellness haven.

Residents of Edmond are one step
closer to having a Sam’s Warehouse as their sign was approved in late 2012. The
final site approval for the development is expected to come through this year.
“There is also space for outparcels, but we will wait and see,” said Yowell.
“We expect more retail and such in that area.”

The Shops at Fox Lake will also
connect with the Wellness Park near Mercy through a series of walking and
biking trails. “There is no existing trail right now. All we have is the
ability to go under I-35 through an existing drainage tunnel,” said Yowell.
“The plan is to take that trail all the way back to Lake Arcadia. You have
Integris’ trail east of I-35 to the Corp of Engineers land. There’s been a lot
of discussion about trails, and Edmond has now developed a bike and trails
masterplan.” Private funds are being raised now for the trail, Yowell added,
and the trails will connect to the existing trails that circle around Arcadia
Lake. “The city will build the trail from the wellness park to the lake,”
Yowell said.

In between Covell and I-35, 300
acres remain undeveloped. On the northeast corner, Francis Tuttle Technical
Center is building a new facility that will include a business incubator and
training center. “Francis Tuttle has a unique plan to build a Center for
Municipal Excellence,” Yowell said. “In a partnership with the City of Edmond,
Francis Tuttle will provide cross-training within the city at the facility. So
part of the new facility being built is for city training programs, and the
rest is for classes.” The Francis Tuttle facility will be part of the Cross
Timbers Building.

On the northwest corner, Edmond
has purchased 7.12 acres at the highest point for a hotel and conference
center. In a partnership with the developer, the city will build a conference
center that will connect with the hotel the developer is responsible for
building. “We surveyed businesses about who they use for a nice hotel, and
there weren’t a lot of options. Plus having major conferences in our city is
great for a lot of reasons,” Yowell said.

The 160-room hotel will join a
20,000-square-foot conference center, which features a 2,000-square-foot
conference room that can be divided to accommodate separate breakout sessions.
“We purchased the land, and the developer will buy it back over a 15-year
period,” Yowell said. “It was $2.2 million for the land, $2 million in
infrastructure and an $11 million total investment. We will have a return of $9
million when it is bought back. The city will shoulder the cost of building the
conference center—$4.8 million.”

Slightly north of Covell and
I-35, a privately-owned sports facility is under construction that will be used
for indoor basketball, soccer and volleyball. A private developer will
construct and run the facility, offering league play during the week and
tournaments on the weekends. “Around that, there is plenty of room for
additional development,” Yowell said.

For more information about the
economic development of Edmond, attend the Edmond Economic Preview, to be held
on Jan. 29 at UCO. The meeting is open to the public. Visit www.eeda.com or call 405.340.0116.