It won’t be long now until the southeast corner of Campbell and Broadway streets in downtown Edmond becomes a hub of activity, with shoppers having their choice of boutiques, dining and more—all in one building. 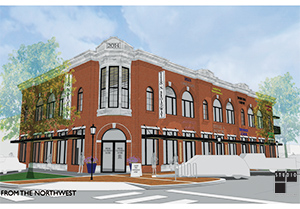 Campbell Corner, the two-story, multi-use brick building is slated to open its doors to customers in early spring this year. Developers and downtown business owners think Campbell Corner at Downtown Edmond Plaza, 130 N. Broadway, might be the spark that ignites even more activity, more new business and more interest throughout Edmond.

“Campbell Corner is generating interest and buzz in the community and about other developments coming,” said Koorosh Zahrai, vice president of business development for Plaza USA LLC, which is developing the project. “Now there’s even talk about a performing arts center and a parking garage in downtown Edmond. There’s some really cool stuff coming.”

The name Campbell Corner might sound familiar to those acquainted with the University of Oklahoma campus in Norman. OU’s Campus Corner, located on the north side of the university, is a commercial district that’s home to a mix of cafés, bars and boutiques. Just four blocks