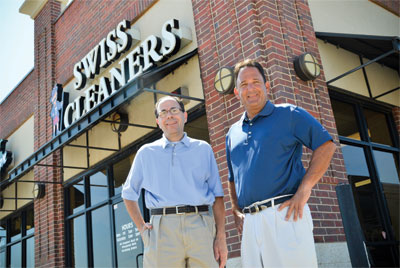 Swiss Cleaners, celebrating their 100th anniversary, is owned and operated by two brothers, John and Jim Limber, who are second-generation American-born Greek immigrants. All four of their grandparents passed through Ellis Island from Greece to settle in Oklahoma City. One grandfather operated his own dry cleaning business before their father, George Limber, married and bought Swiss Cleaners in 1956. Swiss Cleaners, opened by Swiss immigrants, has been in operation since 1912. The first plant was located at NW 10th and Western. Their father opened a new plant in 1966 at 3737 NW 50th St., where it remains today.

The Limber brothers took over the business in 1993 when their father passed away. Today, John oversees office and accounting operations while Jim handles production and plant operations. Currently they own and operate six shops throughout the Oklahoma City metro-area. The newest shop opened six years ago near Edmond at NW 150th and Western.

The brothers take daily personal interest in the business and they stand behind their work, delivering quality dry cleaning. John expressed their philosophy as, “We go above and beyond to make sure our customers are satisfied.”

In 2008, the business began showing the effects of the economy, with customers hanging on to their money by cutting back on dry cleaning. John explained his concerns for