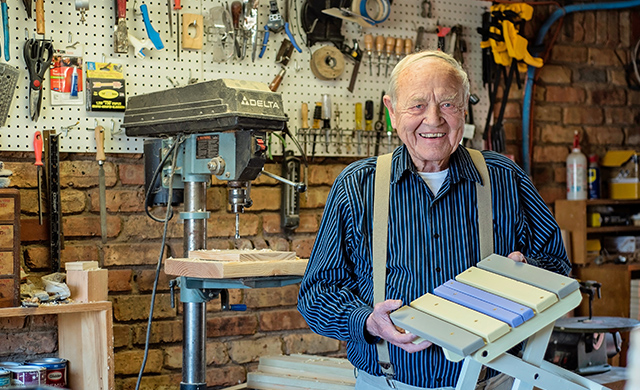 Why does Thurman Davis, age 82, have 60 wooden stepstools in his garage? It started with loneliness. His wife, Peggy, passed away in 2016. After 61 happy years of marriage, the house was too quiet. Davis needed a way to keep busy. Four months ago, Davis starting building folding stepstools. Now, he’s finished 163–and so far, he’s given away 95 of them!

“When people walk down my street, I offer them a stool if they want one,” Davis said. “At first, they look at me like I’m crazy—but I open the garage and let them pick one. I’ve had more fun meeting my neighbors this way. Now, they drive by and wave at me.”

One of Davis’ favorite stories is of greeting a young couple coming down the street with their two little girls. “They were twins, jet black hair, cute as could be,” Davis said. “I happened to have two lavender stools, so after we talked, I gave each of them one.  Before they left, each one had to hug my neck.  You talk about being paid!”