Kaelyn Thompson doesn’t know the name of the man who saved her life when she was gasping for air. His act of heroism was profound, but simple—a heart icon on his driver’s license. Now, his lungs breathe for her, a constant reminder that she could have died at the age of 22, but instead, an organ donor gave her a second chance. 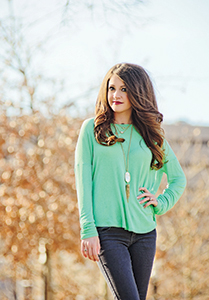 Her lung failure in 2013 was unexpected. Thompson was having a double surgery for her gall bladder and kidney stones—but she struggled to wake up afterward. In that moment, she was suddenly in critical need of a double lung transplant. She was rushed to the specialists at Duke Hospital in North Carolina. After a series of tests that took about three weeks, Thompson was given a Lung Allocation Score of 91. Most people in need of a lung transplant score between 30 and 50. “My score came out so high that I got a transplant within a day and a half—which was very unlikely and super lucky,” Thompson said.

Finding a match is complicated, but an even more pressing problem is the lack of organs available. Currently, there are 125,000 people on the US organ waiting list, and 800 of them are Oklahomans. Sadly, one out of five will die waiting.

“Each one of us is going to die, and upon our death, we can provide organs that save the lives of up to eight people,” said Jeff Orlowski, president and CEO of Life Share, the non-profit organization that manages organ donations in Oklahoma. “In addition, eye and tissue donation can impact the quality of life of another 50 people.”

Thompson was one of the fortunate ones. Her donor was registered, and he matched her needs. She doesn’t know his name due to privacy restrictions, but she will always be thankful for the new life he afforded to her.

“My body was going downhill, but I fought hard while I waited,” Thompson said. “I had a tracheotomy to help me breathe, a filter for blood oxygenation, a ventilator and an IV pole with 27 IVs running at one time. That’s crazy to think about! I had to walk every day, so I had to load up all those machines.”

After her transplant, she spent six weeks in intensive care, followed by more months of rehabilitation and surgeries. She dropped down to 73 pounds. For ten months, her body rejected the new lungs, requiring more treatments, including a form of chemotherapy that made her very sick.

“It was so traumatic for everyone. My family was in complete shock,” Thompson said. “My parents both left work and moved to a new state to help me survive. They didn’t leave my side…” Thompson started to sob, “…they slept in uncomfortable chairs every day for months. My 16-year-old brother was left with family in Oklahoma. People I didn’t even know were praying for me and sharing my story through social media. Some days I was too tired to do anything, but I knew the only way to get back home was to move forward.”

Thompson found comfort through a support group made up of other transplant patients. She made lasting friendships with some other girls her age and the older patients became like second grandparents to her. “It’s very motivating to have friends in the same situation. I talk to them every day. We’re normal in our own world, but it’s not a normal life.”

Now, 19 months since her transplant, Thompson is doing well and working a part-time job. But life is different. She’s easily fatigued, she can’t eat favorite foods that conflict with her medication, and every moment is precious. “My body could go into rejection at any time,” Thompson said. “I live life day-to-day, because I’m not guaranteed tomorrow.”

It was while participating in the Transplant Games of America, an Olympic-style event, that she met a six-year-old who had undergone a transplant at the age of two. “She probably doesn’t remember the trauma, but someone saved her young life. And someone saved mine. And someone has saved an older person’s. Now, those donors are living through other people.”

“It’s inevitable that everyone is going to die, and a lot of people die every day who could be donors. It’s a lasting gift that comes at no cost or detriment to one’s self,” Orlowski said. “Sometimes people say, ‘I’m too old or unhealthy to be a donor,’ but that’s not true. Nearly everyone has something to contribute. Even children can be donors if they share that wish with their parents.”

“You can’t take your organs with you when you pass away, so you might as well give them to someone here on earth,” Thompson said. “I’ve made sure all my friends have the little red heart on their driver’s license now.”

A common concern is that organ donors might receive less care after an accident in order that their organs can be used for a transplant, but Orlowski explains that both hospitals and Life Share are in the “life-saving, not the life-taking business.” In fact, hospitals have no access to the organ donor registry until after someone’s death is reported.

Shortly after Thompson’s transplant, she wrote a thank you note to her donor’s family. “I’m sure they were still mourning and grieving their loss, but I had to thank them for giving me a second chance at life. The families don’t have to accept the letter or respond to it, but someday I hope I will hear from their family. I’d like to know who my donor was and what he was like. If he had a bucket list, I would love to fulfill his dream. I hope for that—because he gave me the gift of life.”

Register as an organ donor online at www.lifeshareoklahoma.org or make the organ donor selection upon renewal of your driver’s license.

by Amy Dee Stephens
"It's been said that nobody walks out of church service humming the sermon,"�� said minister, Kristopher Tate. Although he knows he has preached important and powerful sermons"���he acknowledges that his church, Chapel Hill United Methodist Church, has a special gift for reaching people through music.
Read More  >

by Austin Marshall
Oklahoma's unpredictable weather guarantees two things every year: sweltering heat and bone-chilling cold. As the state's unpredictable spring season arrives, it's critical to make sure that your home or business is equipped with a reliable heating and air conditioning unit.
Read More  >