It was love at first sight for Taylor Hanna. On a sunny summer day in 2010, he was headed to a friend’s wedding, but couldn’t choose an outfit to wear for the occasion. After reaching for his necktie to accessorize his ensemble, Taylor’s father made a small suggestion that would end up changing Taylor’s life. “My dad actually wore bow ties religiously,” Taylor said. “He never wore a necktie. He convinced me to try one on and as soon as I had it tied around my neck I instantly fell in love.” After a little convincing, Taylor was bowing down to the bow tie and five years later, he’s encouraging men to do the same. 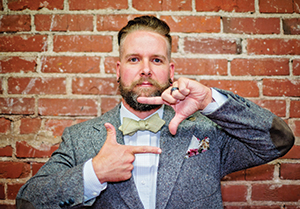 After his first experience in 2010, Taylor started searching for fun and creative ways to accessorize everyday looks with a bow tie. There was just one problem: his imagination exceeded the items actually offered in stores. We’ve all be there. You picture the perfect outfit: the color, style, accessories and fabric. You can never seem to actually bring your creation to life. Most people might end up settling and going for the next best thing. Taylor isn’t like most people. He took his ideas directly to the drawing board and started to design his own bow ties.

“One day my wife said ‘I don’t think you’re finding items that you like because no one makes them.’” Taylor’s wife then suggested that he make his own bow ties and with a little needle and thread, he started to sew his dream designs together. Then Taylor met his next problem: he couldn’t actually sew. Those early days were challenging for Taylor. “I used a needle once in Boy Scouts,” he said. “Other than that, I had never touched a needle before 2010. I literally just went to my closet, took out some OKC Thunder t-shirts and cut out squares.”

He started by teaching himself how to sew a straight line. “I moved on to making t-shirts, pocket racks, and then finally build up the courage to attempt my first bow tie,” he said. In January 2012, Taylor was ready to open his shop, The Clad Stache, and sell the items he spent years dreaming up.

Taylor didn’t grow up with a passion for fashion. In fact, as child he was mainly interested in sports. His idea of dressing up was a good pair of denim jeans and a basic white t-shirt. That’s what’s truly remarkable about Taylor’s success story—he was able to turn his newfound hobby into a profitable business.

It’s not hard to see why Taylor’s Clad Stache is successful. The online store features bow ties of various sizes, designs and fabrics. Taylor has done for men what the shoe has done for women. A basic outfit can be transformed with just a touch of magic. 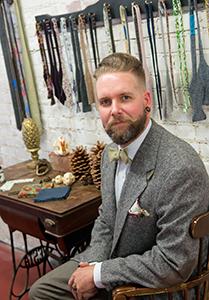 Taylor’s bow ties are one-of-a-kind pieces that you won’t find anywhere else in the world. “These items are handmade,” Taylor said. “The fabrics are different. We use fabrics that other companies won’t even touch.” What truly sets his designs apart are the individuals who wear them. They are designed to fit the ever-changing lifestyles of his customers. “We don’t just try to hit one market,” he said. “We try to hit several different markets by making versatile items that can be worn with anything from a tux all the way down to a denim shirt.”

Taylor is now adding to his design success with a new a line of grooming products. His new beard oil line features appealing fragrances. He just started a kids and baby line. As more success comes, Taylor makes it a priority to give back to worthy causes. His work was recently featured in the Curbside Chronicle, a magazine sold by homeless and low income individuals in OKC. In the story, disadvantaged Oklahomans modeled his designs. He later gifted the items following the photo shoot. He’s hoping to partner with a nonprofit soon to consistently give back to causes that he believes in.

After spending years of focusing solely on the bow tie, Taylor is ready to expand and will soon help more men re-envision their entire wardrobes. “We are looking to expand what we do and break into clothing as well,” he said. I eventually will be designing and manufacturing an entire outfit.” 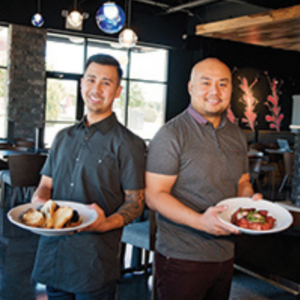 by Austin Marshall
East meets west at Covell Park in Edmond, where Asian influences are fused with American dishes to create a menu without rival in the north metro area.
Read More  > 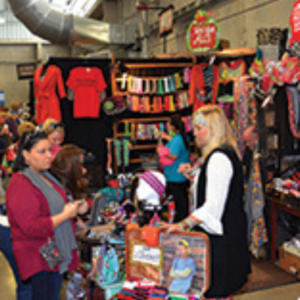 by Morgan Day
A gathering spot for crafters and shoppers alike, An Affair of the Heart has become and Oklahoma institution
Read More  >