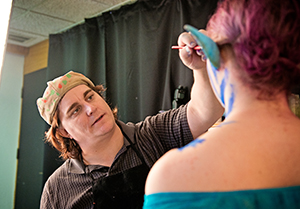 One might think that the latest superhero movies are the inspiration behind Bryan Crump’s body painting—but he explains it as an art that has been around since the dawn of time.

“Body painting is one of the earliest forms of expression,” Crump said. “It’s been used in tribal ceremonies, wars and weddings. Cave men painted their bodies to scare predators away. For the opposite reason, women paint their faces every day.”

Crump uses his elaborate artistic skills to transform people into fantasy creatures. By using skin and clothing as his canvas, he creates a temporary art form that, he believes, has a much longer-lasting effect than a costume at a party. For this reason, he calls his work “transformational art.”

“I’ve watched people with low self-esteem, who come in slouched and talking in a whisper, become confident, vocal and stand taller,” Crump said. “Sometimes they aren’t even recognizable. They feel something they’ve never felt before.”

The reasons someone might choose to be painted are varied. Some are models needing a new look for their modeling portfolios, others are going to a club or an event and want to stand out. Crump’s early work was with a jewelry company that hired him to paint their jewelry models in Las Vegas. He later worked with movie costume crews in the Los Angeles entertainment industry. His portfolio includes actress Sasha Williams, the Oklahoma City Ballet Company, and models featured in Swimsuit Illustrated Magazine.

Regardless of why customers choose to be painted, watching people’s look and behavior change is highly motivating to Crump.

“Many of them just want to try a new experience. I spend time talking to my clients to find out where they are coming from and what story they are trying to tell.”

Because his artwork causes people to embrace alternate personalities, he’s cautious about transforming customers into evil characters, such as demons or zombies. According to Crump, “If people have a dark side and I turn them to into a monster—they can become monstrous. It’s not comfortable for me to nurture someone’s dark side.”

Crump had practiced art from childhood. Growing up on an acreage, he ventured into the forest and used his imagination to build a fairytale world. He drew dragons and learned Japanese animation so well that, in high school, his work was published by B. Dalton Bookseller, and he was a guest on the local Ranger Roger television show. 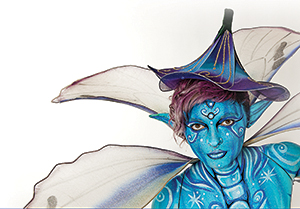 Body painting started as a hobby for his friends back in 1997. While doing some photography work for the Oklahoma City Ballet in 2012, he was invited to paint one of the highly-costumed ballet performers for the show Firebird. He decorated the dancer’s unitard with elaborate flowers and flames, and before performances, he painted her face to match. The character was photographed and quickly became an icon for the show’s posters and promotional materials.

“That was a dream come true for me,” Crump said. “At the time, my mother was very sick—but she got to see that before she passed away. She saw my art promoted by such a respected venue as the ballet.”

As with any art, Crump’s work is unique and personal. On average, he spends two to eight hours on a body painting project. Holidays and special events are peak season for him, during which he uses assistants to help with base layers so that he can focus on the detail work.

For Crump, temporarily transforming people into heroes or fantasy creatures breaks down barriers and self-perceptions. It also can be a lot of fun. Crump recalls a visit to the state fair with some friends he had painted. In the exhibit hall, a vendor had a cartoon character prop by his booth. Suddenly, the vendor looked up and saw additional characters next to his. He thought someone had put up new props—until they moved!

“My creations generate so much excitement and wonder—and the response is that viewers start to engage their own imaginations. For an artist, that’s an amazing process.”