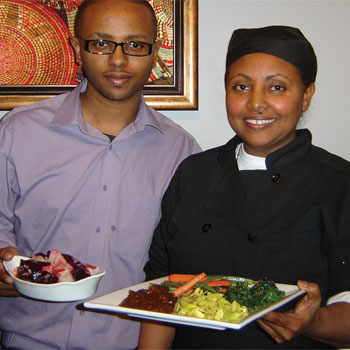 The phrase “silverware available upon request” printed on the menu is an indicator that the new Blue Nile Ethiopian Cuisine, 3209 S. Broadway, is more than a restaurant, it’s a dining experience.

Dining in Ethiopia is characterized by eating from the same plate, even placing food in the mouth of another diner from one’s own hand, said Selam Abebe, owner and chef at Blue Nile. “It signifies the bonds of loyalty and friendship.”

Some diners might not be adventurous enough to feed their companions, but even so, Blue Nile
offers them an authentic taste of Ethiopia. Brightly colored dishes are cooked in the
traditional manner, such as
injera, which according to their website is a pancake-like bread that is part of every
entrée. In Ethiopia, diners break off bites of injera and scoop up mouthfuls of food to eat.

According to Blue Nile’s website, their injera is made from self-rising wheat flour and teff flour, a grain native to Ethiopia. They strictly follow the
tradition instilled in them by their mothers and grandmothers and never used baking powder, baking soda or processed yeast in making injera.

Abebe learned to cook from her mother and aunt, who owned a restaurant in Ethiopia. Abebe’s
father also once owned a restaurant, the first Ethiopian establishment in Dallas, she said, and it was called the Blue Nile as well.

The first traditional dish Abebe learned to
prepare is on the Blue Nile menu – Ye-Doro Wot, a chicken leg on a bone in a thick stew made with seasoned red hot pepper, onion, garlic, ginger root and clarified herbed butter, served with a boiled egg and ayib (Ethiopian homemade cottage cheese made from buttermilk). In Ethiopia, they use the whole chicken, Abebe said, and it takes a half day to cook in the thick stew.

“People made fun of you (in Ethiopia) if you didn’t know how to cook it when you married,” Abebe said. “After you wed, you cooked it and took it to your in-laws at Easter time and that’s how they measured you.”

Abebe, who has a bachelor’s degree in nutrition and food service management from University of
Central Oklahoma, uses no artificial coloring, flavoring or preservatives, and no eggs, milk or honey, in keeping with common food practices in her home country. “Vegetarian dishes are very popular in Ethiopian cuisine,” Abebe said. Their website explains that Orthodox Christians are prohibited from eating meat and meat by-products during Lent and most
Wednesdays and Fridays.

Other traditional Ethiopian dishes served at Blue Nile include kitfo, an Ethiopian-style steak
tartar seasoned with a special blend of hot spices and herbed butter; and wot, a stew that can be made with
vegetables, beef, lamb, chicken or fish, and ranges from spicy to mild. Native coffee, brewed from
yergacheffe beans with a dash of cloves, is offered by the cup or in a traditional ceremony for small groups.

“(Blue Nile) is different,” Abebe said. “Edmond people like to travel, to try different things. I have the knowledge and experience to bring my culture to
Edmond, and to allow people here to experience it.”

The moderately-priced Blue Nile is open 11 a.m. to 9 p.m. Tuesday through Saturday, and noon to 10 p.m. on Sunday. For more information, call 330-9987 or visit www.bluenileedmond.com.