Before & After: Platt College 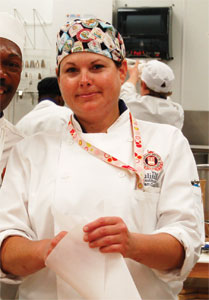 Glamorous dreams of becoming a race car driver or ballerina can fill the minds of children at a young age. Those aspirations may dwindle with time or become a determination that drives them towards those dreams. However for some children, their desitny becomes one they thought they’d never pursue, but once fulfilled becomes an unexpected ‘dream come true.’ Such is the case with Robin Obert whose upbringing in the restaurant industry eventually led her to Platt College and ultimately to her dream job as executive chef for Governor Mary Fallin.

As a child, Obert’s family owned and operated several restaurants as well as the first man-made water park, Big Surf, in Tempe, Arizona. As an adult, Obert is thankful for her childhood. “My dad had this incredibly strong work ethic. Summers, at just 12 years old, he’d get us out of bed early to get the park ready. He’d say, ‘Don’t ever expect your employees to do something, you’re not willing to do.’ That’s always stuck with me. There’s nothing I’m not willing to do because he was willing.” With this strong work ethic and perseverance, Obert was driven to succeed in anything except follow in the family business. “I swore I’d rather starve than work in the restaurant business because I was always working,” laughed Obert. “Yet, that’s how I put myself through college.” After attending colleges in Colorado and San Diego, circumstances brought Obert to Oklahoma where the dream began to unfold.

“When I moved to OKC I saw the ads for Platt College and was intrigued. After touring the facility, I was impressed with what they had to offer. Even though I’d always held parties at my house for 40-50 people, it wasn’t until after visiting the college that I gave in to what I knew I was called to do,” said Obert. 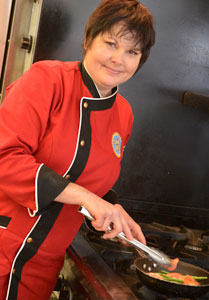 Obert’s cooking education began when she was a child, but Platt College gave her the classical techniques and refreshed the skills that helped her become the chef she is today. “I’ll never forget when we’d have catering events at our water park and have 3500 people a day. My dad handed me a cleaver and gave me cases of whole chickens to cut up,” laughed Obert. “In hindsight, I think I’d never give my 12-year-old a cleaver, but I never hurt myself because he taught me how to hold it. It’s surreal, but it’s who I am.”

After graduating from Platt College in 2005, Obert was asked to open and develop Café Broccato, Platt College’s pastry school in Moore. After a year as general manager and executive chef at Café Broccato, Obert became an instructor at Platt’s north campus. During her fourth year, Obert was offered the position as executive chef to Governor Fallin. “I received an email stating the governor was looking for a chef, asking if I was interested. I initially told them I wasn’t because I loved my job. But then, I emailed them back stating that I‘d meet with them,” Obert recalled. Obert began her position as executive chef in the governor’s mansion on November 2 of 2011 and according to Obert, “It’s been absolutely incredible.”

As an executive chef, Obert brings the same dedication and work ethic that her father instilled in her so many years ago. “Cooking is my passion, it’s what I live for. It’s all about people and how you can step up to the plate and give back. If you’re not living your passion, it’s hard to enjoy what you’re doing. I’ve got the absolute best job in the world and I owe much of that to my education at Platt College.”

Platt College offers the only ACF Accredited Culinary College in the state of Oklahoma. Aside from Culinary and Pastry Arts, the college also offers varying diploma and degree programs in Allied Health and Nursing.