Move over, eggs and waffles. Bacon is no longer just your salty sidekick, dressing up breakfast platters with a gratuitous protein. This sizzling little number is headlining menus and stealing the spotlight at the mere mention of its meaty name.

Insatiably popular, bacon is leading trends and inspiring an intense following. After all, it takes more than a casual connection with a food to move you to purchase a bacon wallet, socks, vodka, air freshener or bacon-flavored toothpicks or commit to a bacon tattoo.

Somewhere between the Atkins diet craze and modern smoothie revolution, bacon blazed a welcomed trail to our hearts. Who could resist? Crisp, smoky and marbled with ribbons of forbidden fat, this morning mainstay has become the dish du jour, any time of day. Meats, sweets and everything in between are finding new life with a kick of bacon. 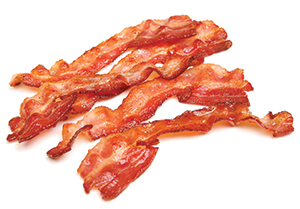 Leading the bacon boom, Bricktown Brewery, with four locations, debuted a pork-centric menu in 2011 when it refashioned its downtown digs. True to its menu motto, “Life tastes better with bacon,” this urban hot spot delights diners with two varieties