Backpacking in the wild can be a once-in-a-lifetime adventure, but for Kinsey Winters, it’s a once-a-week adventure. She dons a 50-pound backpack and leads vacationers through wild, uninhabited territory.

The Edmondite has a wandering spirit, so she guides adventurers in different places each season. This summer, she’s working for Wildland Trekking, leading people through the backcountry at Yellowstone National Park, the Grand Tetons, and the Wind River Range.

“It’s fun and humbling to share these intense experiences with people who might never have seen a pristine natural environment before. Some have never spent a single night camping, or know how to set up a tent or go to the bathroom in the wild,” Kinsey said. “They can feel very vulnerable, but I’ve developed a lot of insider tips over the years, which helps me better at teaching my guests.”

Besides leading people, Kinsey and her fellow guides are also in charge of pack llamas. “Llamas are really docile and are less invasive to the environment than horses because their feet cause less erosion and they graze on a wider food variety,” Kinsey said. “Llamas also provide safety. Their long necks help them see danger, like bears, and alert us before we can see it.”

Depending on the tour, Kinsey may lead a string of five to nine llamas, making sure they are fed, groomed, haltered, and carrying a balanced weight. It’s also important that Kinsey find both animals and humans a safe place to sleep at night.

Sometimes extreme backcountry challenges present themselves. In June, Kinsey and her group were among 10,000 tourists evacuated from Yellowstone National Park after extreme flooding. The rain was devastating to the landscape, but Kinsey admits that as soaked as they were, it was fascinating to see Yellowstone with zero tourists as they hiked out of the park.

With a wildlife ecology degree from Oklahoma State University, living the “wild life” is not a new experience for Kinsey. Her interest in animals began when she was a teen volunteer for the Oklahoma City Zoo. “The zoo was the first place I was able to experience ecosystems outside of Oklahoma,” Kinsey said. “That accessibility to animals and habitats sparked my curiosity. I also learned how to educate people about nature. Other guides have hiking skills, but few have the presentation skills that I gained at the zoo.”

After graduation, Kinsey returned to the zoo as a part-time primate caretaker. In her free time, her dad helped her convert a 17-foot school bus into a travel trailer—then she headed off to wander the west coast of the United States. Kinsey traveled to see the “extreme grandeur” of Glacier National Park, which included a rafting trip. She enjoyed it so much that she returned the following summer to become a raft guide.”

“I’ve bounced around to different places and taken all kinds of jobs to make a little money, from farming to waitressing,” Kinsey said. “When my bus engine overheated, I started living out of my car—which I’ve been doing comfortably now for years.”
Last summer, Kinsey traveled to Baja, Mexico to spend three months at the beach. “There’s a lagoon where 30-ton gray whales literally look you in the eye and let you touch them. It was insanely incredible!” Kinsey hopes that her next adventure might be as a naturalist in Alaska, interpreting about whales.

“Wherever I go, I’m constantly learning,” Kinsey said. “It’s magical introducing other people to nature as well. They often tell me that I’ve changed their life—and that’s a special thing.” 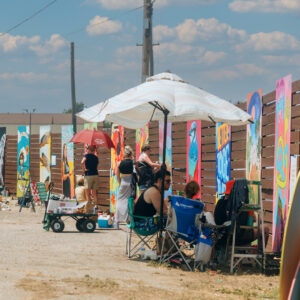 by Amber Plaksin
After a successful first run in the Britton District of Oklahoma City in March 2021, The Sunny Dayz Mural Festival is returning for a second year, this time to be held in Downtown Edmond. Immersing visitors in a world of color and creativity, 42 artists from Oklahoma, other states, and Europe will create 31 new...
Read More  > 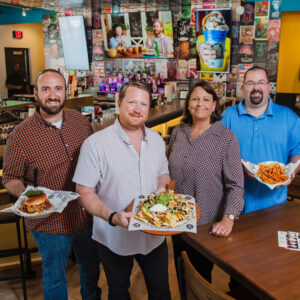 by Laura Beam
When you discover how much flavor a burger can pack, you must be at S&B’s Burger Joint. No cookie-cutter, one-bun-fits-all burgers here! This burger boss rocks a menu of seriously creative combos with their Classic Rock, Indie Rock, and Hard Rock selections. Nostalgic music videos and fun memorabilia give you a front-row seat to the...
Read More  >