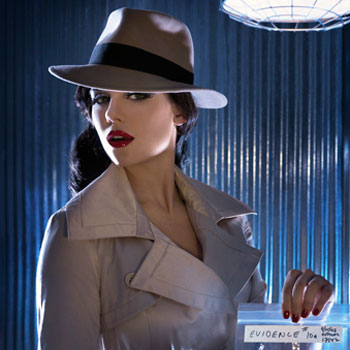 Few people can say they have their dream job, but Erin Spencer is one of those people. She is an actress who has appeared on the hit show “CSI: Crime Scene Investigation” and played in several films and commercials. She has also been a magician’s assistant in Biloxi, Mississippi, a dancer in “Chicago the Musical” in New Zealand, a commercial actor aboard a boat headed toward Catalina Island, a motion capture performer in the virtual world of video games and the spokesperson for Olay Pro-X Clear.

Spencer lives in Los Angeles and attended Idyllwild Arts Academy in California. But it was from the Sooner State that Spencer began building her artistic foundation. She was chosen to become a member of the StarDanceSwan dance company as a fifth-grader at Will Rogers Elementary. Her heart has been set on being a performer ever since. “StarDanceSwan was really pre-professional training. Not only was (artistic director) Lorrie Keller so creative, she encouraged us to be co-creators with her. Lorrie Keller has been a major inspiration in my life,”
said Spencer.

The actress still remembers her first performance with StarDanceSwan. She was 10 years old and was to open the show with her partner. “I was so nervous. I went to the bathroom because I thought I was going to be sick and everybody kept knocking on the door,” she said. The show couldn’t start until she pulled herself together, but then all went well. “I loved being part of the creative process,” said Spencer.

Rehearsals for the show were some of her favorite times. “My mom would bring us dinner in a Thermos and we’d hang around the theater until we were called on stage.”

Spencer is working on a variety of projects, including voice-overs and modeling for print publications, but wants to concentrate on acting for television. “I would absolutely love to be on a series that runs for 10 years, working with the same people and having the character develop over time.” She said if she could work on a show that runs currently, it would be “Mad Men.”

Spencer watches a lot of movies and her favorite actresses are Meryl Streep, Christina Hendricks and Diane Lane. “Diane Lane is definitely talented,” she said. “She is very good at what she does. She’s so beautiful, and I was really excited to work
with her.”

Acting is a very competitive field and often there are as many as 1,500 candidates vying for a single role. Auditions are scheduled on short notice and actors have to be ready all the time. “In general you have about a night to prepare for an audition,” Spencer explained. Sometimes actors don’t even see the script. “For ‘Mad Men’ or some of those big shows, they don’t want scripts floating around, because they don’t want storylines to get out to the public.” And even if she doesn’t get selected for a role, Spencer has learned not to take it personally. “In my mind, every ‘no’ is one step closer to a ‘yes’! Everybody who dreams of Hollywood and being discovered at the 7-Eleven will move to L.A. and soon after will find out that is not the way it works at all. You really have to put the work in every single day.”

Spencer has had all kinds of surprises while performing – costumes that fall off or things that break. Once, what should have been a light first-day rehearsal turned into a vigorous workout. Spencer and a group of actors were trying to repeat the movement of a Japanese instructor for motion-capture roles in a video game. The moves got more difficult until the actors started doing cartwheels holding pistols and machetes. “It started getting crazy, but it was the first day on the job and nobody wanted to get fired,” she joked.

Spencer still keeps in touch with her Edmond friends. Although she enjoys the ocean and mountains of California, she has not forgotten the excitement of an Oklahoma lightning strike, the sound of heavy rain beating down, or the ominous feeling of an approaching storm.

“Acting is such a joy and sometimes it looks so easy, but it takes a lot more work than people realize,” said Spencer. “It’s hard even if you love it.” Spencer never stopped loving her craft and chances are that won’t change any time soon.