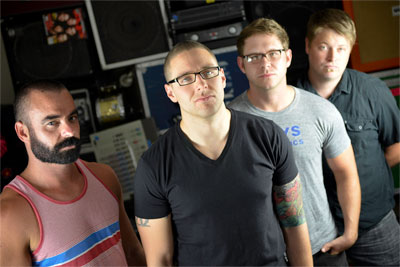 They Stay Dead, an Edmond-grown quartet of skate-rock aural assailants, formed less than two years ago, but each member is a war-tested veteran of local music and each brings invaluable experience and skill honed by years in the punk rock trenches.

“We grew up punk rockers in Edmond,” Dave Klein, bassist, remembers. He and drummer John Hernandez have played in bands together for 13 years, and in that time Matt Owsley (guitar and vocals) fell into their ranks. Eventually, They Stay Dead formed and fourth member Danny Black (also guitar and vocals) signed up. Klein and Owsley graduated from University of Central Oklahoma and Memorial High School. Hernandez went to Edmond North.

The band released a duo of three-song EPs last year — a self-titled one and “Cursed.” Copies can be purchased at their shows or on Facebook and Bandcamp.com with a name-your-own price policy. As to be expected with such an arrangement, most people choose not to pay anything for the music, and that’s okay, but some people have paid as much as $25. Klein thinks that was probably a kid from Japan, where They Stay Dead is cultivating an unexpectedly devout following. “We definitely have more downloads from other countries and more downloads from other states than here,” he says.

The band recently returned from the road, after gifting their music upon the ears of residents in Missouri, Illinois, Georgia, Tennessee, North Carolina and their home state. “It was awesome. It was better than expected,” Black reports. “Kids were there, we got paid; we had a place to stay every night. It was great.”

Two of the biggest stops on the tour were “Death to False Hope,” an all-punk music festival in Durham, North Carolina, and a battle royale between two punk bands and two metal bands at the Caledonia Lounge in Athens, Georgia. “People got punched,” Black says. “Metal-heads went flying,” Klein remembers. “[There were] awesome riffs,”
Black adds.

“We didn’t have a bad show. There was never a point where we were just playing to the club staff and other bands,” Klein says. “We never had an empty house.”

They Stay Dead already have enough material for a third recording, but right now they’re focusing on playing shows and writing. When they do step into the studio again, it will likely be with Mike Kennerty, Edmond native and guitarist for The All-American Rejects. Kennerty is an old friend who produced and engineered They Stay Dead’s previous recordings. “It’s the perfect environment for us,” Hernandez says. “He knows our musical taste. He knows what we’re going for.” “He’s spoiled us now; we don’t want to go anywhere else,” Klein relates.

The band’s name comes from their shared love of zombies, but their songs come from everywhere else. Inspiration, however, almost always finds Owsley in the shower (like all true artists) and he must jump out and find a guitar quick because the clock is ticking. “I have a window, from when I hop out of the shower, of like 10 minutes, where I can remember the cool song I just wrote in my head,” he admits.

“Matt brings us a stripped-down, bare-bones shell of a song — the basic template — and we fill in the blanks,” Klein explains. “John and I get weird for a while and then it evolves.”

New ideas form constantly, and all four members have an endless band meeting online. “All day, every day, we’re talking to each other about the band,” Klein says. “Structurally, songs usually come easy for us,” Black says. “It usually falls into place.”

“We probably spend more time trying to name songs,” Owsley adds. Their song-naming process is somewhat chaotic. “We have a song called ‘Paper’ because it shreds,” Klein explains. Their song “Darkness” is actually “Star Wars.” “We’re good at executing songs,” Black says. “We care about the music, so we play it passionately.”

“This is the right group of guys,” Klein says. “We spent a week in the van together and no one fought… everybody gets along; everybody’s amazing at our instruments. This is my dream band.”

August 13, they’ll take the stage at VZD’s Restaurant & Club, 4200 N. Western in Oklahoma City. You can find out more about the band at theystaydead.tumblr.com, or by following them on Twitter.