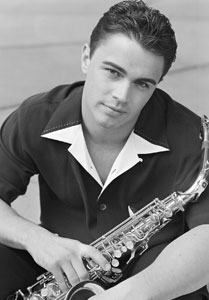 When listening to the tunes of Justin Young’s newest album, “Nothin’ but Love,” you could feel as though you are sitting in a dark jazz club as the cool lights reflect off his saxophone. His music infuses the classic touch of jazz with a play on contemporary music to create an unforgettable sound.

A Detroit-bred saxophonist who spent recent years branding himself in California, Young is now settled in Edmond, having been relocated by his day job with The Boeing Company. Though he, his wife, Rachel, and young son, Tyson, have been in Oklahoma for less than a year, Young is already making a name for himself with the locals because of his wide appeal. You’ll find anything from country to R&B in his repertoire. “My main focus is to capture the audience… to give them a song that they didn’t think would fit the mold,” says Young.

Young released his first album, “On the Way,” in 2007. Now with three albums available on iTunes, the sky is the limit for this talented musician. With a variety of songs he has written, he loves to perform with his band at local venues such as Vin Dolce the Wine Bar and Boulevard’s Martini Lounge, captivating the audience with his unique style. You probably wouldn’t expect to hear “It’s Getting Hot in Here” or any of Michael Jackson’s songs played on the saxophone. That is, of course, unless they’re listening to Justin Young.

He was even asked to perform the national anthem at the Thunder vs. Jazz game on Valentine’s Day. He notes how impressed he was by the energy of the crowd and the spirit of the Thunder, as it is one of the few teams that still do an arena-wide pregame prayer.

Young’s musical outlook is inspired by a piece of advice he was given by his father, Jim Young, when he was a teenager. “He told me it was a good idea to get a degree and have something to fall back on,” says Young. Rather than rely entirely on his musical ambitions, he found another field in which he could flourish.

As a young child, Young would spend hours with his collection of Legos. He was fascinated with creating something enormous out of the tiny pieces. “When my parents pushed me to get a degree outside music,” recalls Young, “I thought, what degree can I get that would make it possible to put things together?” As it turned out, there was something else he was passionate about. He soon pursued a mechanical engineering degree from Michigan State University that would eventually lead him to his current position as a project engineer for the B1 program at Boeing. “My whole life, science and music have just sort of gone together,” he says.

But even with his academic success, Young made sure not to let his musical career fall behind. While attending school, music provided a supplemental income as he performed his first gigs at weddings. Soon after, his saxophone was taking him across the country, landing him on the Los Angeles Morning News in addition to opening for Earth, Wind & Fire and The Temptations. He also has performed with guitarist Peter White. “Music has taken me places I would’ve never dreamed,” says Young.

And though he knows that music has brought him many opportunities, he doesn’t forget his second passion, which consumes his days before he gets to perform at night. In this way, he sees himself not as a musician or a project engineer, but a combination of the two. In fact, Young has spoken at several high schools on this very subject. He tells young adults that they do not need to limit themselves to one goal. “You can still get fulfillment out of life [pursuing two subjects],” he points out.

And, as he illustrates, two seemingly different things can go hand-in-hand. Young is currently pursuing an MBA at the University of Oklahoma. He says he’d like more opportunities to mentor children and teens and spread his theories on the fusion of music and academics.

In this day and age, with so many crossovers between industries, one can hold virtually any title they set their mind to. This sensibility is what Young holds dear. For more information about Justin Young, go to justinyoungsax.com. For booking information, email bookings@justinyoungsax.com. 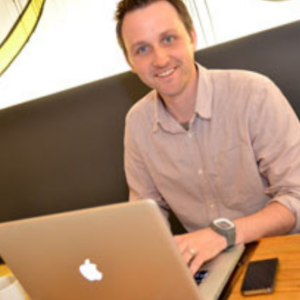 by Lindsay Whelchel
Sports can be a hot topic, especially in Oklahoma. And perhaps equally as popular a topic is that of social media. Where the two collide, there is much debate. The issue of student-athletes using social media and the response from universities to monitor their online activities is a touchy subject for many. An Edmond entrepreneur...
Read More  >