ARTS: Message in the Music 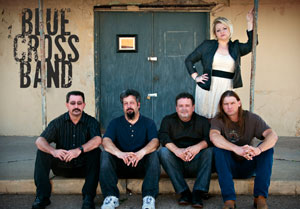 Perhaps one of the biggest challenges Christian rock bands face today is ever-present criticism. Go too far one way and you disappoint a strong believer. Sway too far to the other, you fail to connect to a music lover. Blue Cross Band doesn’t let the skepticism faze them. Their response? “We’re gonna rock your socks off.”

It all began with co-founder and Edmond local Rick Wooldridge who picked up a guitar at age 9 and performed at his first bar in sixth grade. “I spent a lot of time going down the wrong path,” he admits. It wasn’t until he was 33 that Wooldridge found his true calling.

Edmond, he says, is where he received his spiritual upbringing. Though he lived his entire life surrounded by music, he never wrote a single lyric until he accepted Christ. “When I got saved and used the abilities God gave me for His purposes… that’s when the songs started coming.”

Meanwhile, co-founder Tom Farrier says he felt the urge to call Wooldridge. The two had been bandmates years ago. He said simply, “Man, we gotta play.” With that, the two picked up just like it was yesterday. Wooldridge took to guitar and vocals, while Farrier accompanied on bass.

Soon after, Wooldridge brought in guitarist Mark Richards, whom he knew from church, while Farrier urged his coworker Rob Sheppard to join them on the drums. “I said, ‘We’re putting this thing together and just gonna see what happens.’ And that’s where it took off,” he recalls.

Still, the band felt something was missing. They needed one more member. So they took to slightly more modern methods of advertising and put an ad on Craigslist.

“First time I ever responded to anything on Craigslist,” laughs Cassie Lauhon. The vocalist admits that although she was a little nervous walking in, she felt completely at home from the beginning. “It was like I instantly had a group of brothers,” she said.

That’s not to say her husband wasn’t a tad nervous about Lauhon heading off to meet four male strangers. “He was like, ‘No, you can’t go! They’re wanting something,’ ” says Lauhon. “I said it’s OK. It’s at a church.”

And so Blue Cross Band was born. Not long after, they landed a record deal and released their first album, “Walls Are Closing In” in March by Tate Music Group.

Blue Cross Band has been compared to The Allman Brothers and earlier work by The Doors. A throw back to the ’70s, they believe in good vocals, good harmonies and guitar work.

While some Christian bands feel the pressure to choose worshipful tunes over trendier rhythms, Blue Cross Band senses their audience’s desire for a perfect blend of the two. “They’re hungry for that type of musicianship in Christian music,” says Wooldridge, “And they’re not getting that.” Until now.

As Farrier puts it, “Just because you go to church doesn’t mean you can’t listen to rock ’n’ roll.” Adds Richards, “It’s not just a Christian thing…[we have that] old school rock where you can get out there and have a lot of fun.”

While they each have a favorite track on the CD, Lauhon says it was “I’m Free” that got her hooked from day one. Listening to that song, she knew this is where she wanted to be. “I think one of the beautiful things about music is that you can connect to a lyric or a melody or a person that’s performing it,” says Lauhon. “It can bring you together and help you feel not alone.”

That is ultimately what Blue Cross Band is about: putting their message into the music in a way that people can relate to. Coming from different backgrounds, the members of Blue Cross Band let their differences bind them through their unique style, and it shows on the album, which is available on iTunes and Amazon, among other record stores. With a fusion of rock, blues, country and worship, listeners have multiple opportunities to connect to the music. As Lauhon puts it, “There’s something on there that everyone will like and respond to because it’s so varied. I love that about the album and I love that about our band.”

The Blue Cross Band is scheduled to perform at the Route 66 Festival in Bethany May 26th at 1 p.m. and at the Hafer Park Summer Concert Series on July 5th at 7 p.m. For more information, visit www.bluecrossband.com or find them on Facebook.