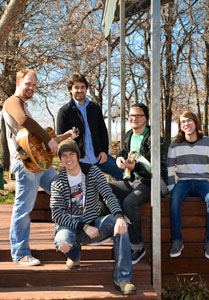 If you’ve hit any of the metro’s St. Patrick’s Day celebrations, you may have heard the Righs play. For those more hardcore into the local punk or Sca scene, you’ve definitely heard them at places like The Diamond Ballroom, the Opolis in Norman or The Conservatory.

For the group of six, most hailing from Edmond, it’s an eclectic mix of old-school punk, Irish metal and traditional Celtic salted with a touch of reggae and Sca. The Righs (pronounced “rigz”) is Oklahoma’s first punk Celtic band, and although they’ve laid low for the past year, they are gearing up to jam the city again with their one-of-a-kind sound utilizing electric guitar, bass, drums, banjo, violin, mandolin and even trumpet. “We put a lot of energy into it when we play,” says Ronnie Meyer of Edmond, drummer. “When we play in a bar and people start drinking, they love Irish music. Everyone gets into it. You can’t help but have a good time with this music.”

In January 2010, The Righs released their second album entitled “Roses,” a mix of 18 songs over 70 minutes long, and on St. Patrick’s Day this year, the Righs will come out of the shadows to play at the Belle Isle Brewery in Oklahoma City.

The band, formerly known as The Rivers, was formed in late 2005 by Nathan Williams of Edmond, vocals and acoustic guitar. “I was trying to put together something different, something kind of indie/folk/emo,” said Williams. “I brought in Jack (Jackson Alexander Templeton Smith) as the drummer. We’re a tight-knit group because we grew up around Edmond. Jack and I knew each other from high school.”

Smith and Williams started in with writing music, but the sound didn’t click until Smith wrote a song with a heavy Irish influence. “I wasn’t interested in my Irish heritage until high school, and I heard Flogging Molly and bands like that, and I liked it,” said Smith. “Flogging Molly was my first exposure to full-blown hard Irish punk.” The Irish sound felt right. Soon, the band, which now includes bassist John Slawson and Omid Nowrouzi of Edmond, were pounding out songs left and right with a shot of Irish influence. “The Irish have happy songs, drunk songs, sad songs, sad drunk songs and happy drunk songs,” said Williams. “Summed up, we had 15 songs about drinking, love and death.”

All the members were veterans of the local punk scene. Slawson and Nowrouzi brought in their own talents with Nowrouzi learning the mandolin to add a different sound. The band picked up Jian Azimi, violinist, while Smith and Williams were at the University of Oklahoma for college. By late 2006, they were sharing the stage at local venues throughout Oklahoma City and Texas, playing with touring acts like Big Reel Fish, The Toasters, The Business, Flatfoot 56 and
Street Dogs.

By 2007, the Rivers had changed the name of their band to the Righs and the first album, “The Rivers Run Deep,” was recorded and produced by Chris Harris of Bell Lab Studio and Subatomic Sound in Norman. The second album, “Roses,” was mixed and mastered in 2009 at Green House Recording studio in Moore, which ironically was owned by their former drummer David Johnson. “We went through six drummers before we found Ronnie,” said Williams. “It was right after our second album was recorded that he came on.”

The Righs hit the Oklahoma scene playing venues like VZD’s, The Belle Isle Brewery, The Conservatory, the Blue Note and the Opolis. Their shows are filled with a lot of music, and a bit of good ol’ Irish pub fun. They play with the audience and become part of that energy. “I have a wireless violin, which gives me the freedom to run around in the audience.” said Azimi. “I’ll jump out into the pit and dance with them and play at the same time.”

The future for the band includes more venues. “We’re trying to get back on the horse,” said Williams. “We played about seven shows last year, and we want to play 52. We love going to out-of-state shows.” The band is also working on a third CD with a heavier mix of other genres, including reggae, Sca and folk. “We will do a lot with the Sca sound,” said bassist Slawson. “A lot of new stuff.” For the Edmond boys, the music itself is what brings the biggest reward.

Look for them on Facebook and listen at www.myspace.com/therighs.