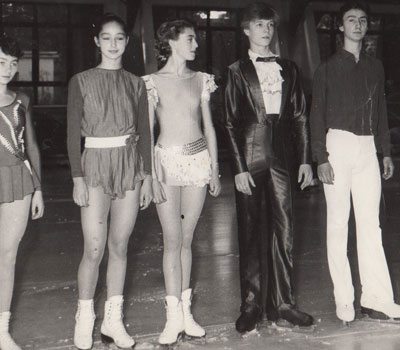 “I am a dreamer. I am an athlete.”
That’s how Kazakhstan native and ice skater Dmitri Logoutine describes himself. He’s also a successful businessman, recently opening three rinks this year alone, including Edmond’s very own Outdoor Ice Rink at Festival Market.

But Logoutine’s journey started back when he was a teenager. At the young age of 14, he left his family to pursue his dream of ice skating and moved to Moscow where there were more opportunities to get on the ice. In no time, his talent was paying off and he was a Junior World Champion in ice dance.

He continued to succeed, becoming a lead ice dancer performing classical artistic productions with the Russian Ballet on Ice; that is, until one fateful night in 1994. The ballet company scheduled a United States tour but their sponsorship failed and they were stranded in Oklahoma City in October that year. They scrambled for housing and some of them were even in the YMCA at the time of the Murrah Building bombing. Although physically unharmed, their dreams were shattered.

But hope was not all lost. The Russian Ballet on Ice and some very generous Oklahomans provided for the 24 skaters for more than seven months. Six of the 24 were fed, clothed, housed, given medical and dental assistance by the people of Edmond. Logoutine was one of them. He spoke no English but was eventually granted a work permit.

Although offered lucrative skating and coaching opportunities elsewhere, Logoutine chose to remain in Oklahoma. He believed that God wanted him to remain here to repay the kindness of Oklahomans who had helped the Russian skaters. “I believe we have to grow where God plants us,” he said.

He also said he believes that hard work pays off and he sets that example. Logoutine operated the Devon Outdoor Ice Rink for Oklahoma City’s Downtown in December project for the past eight years with more than 26,000 paying skaters last year. This is his fourth year to operate the BOK Center’s Arvest Outdoor Ice Rink in Tulsa. And this is the first year to operate the Edmond Outdoor Ice Rink, the Marc Heitz Outdoor Ice Rink in Norman, which benefits the Regional Food Bank, and another outdoor rink for a car dealership in Frisco, Texas.
“I believe that true success of a person lies in the ability to serve others with your very best talent — the full realization of your talent in serving others,” he explains. “In order to succeed, you must meet people’s needs,” which is why he is spreading his talents to the entire area.

And his work doesn’t stop there. For the past 16 years, Dmitri has taught ice skating at Arctic Edge in Edmond, Blazers Center in Oklahoma City and Oilers Rink in Tulsa. Not to mention he is also a single dad to two very active daughters, Sasha and Dasha who are champions in gymnastics and ice skating. And the icing on the cake? He recently obtained his U.S. citizenship.

Logoutine has never shied away from his dreams and has already seen many come to fruition, but he says it doesn’t stop there. “If I do only one thing, it is to inspire people to be physically active in life and to understand the value of physical activity to their health and their future,” he said.

Although it seems Logoutine has enough rinks on his plate, he does think one place is a bit lackluster without some ice. “Wouldn’t it be cool to put an ice rink in the White House for the winter holidays?” But in all seriousness, Logoutine wants people to know him as someone who has used his talent to help others, as others have helped him with their own generosity. “If I will follow my heart, I will have no regrets,” he says. “I wish to create. I wish to plant seeds.” And we’re fortunate that he’s planted one right here in Edmond. 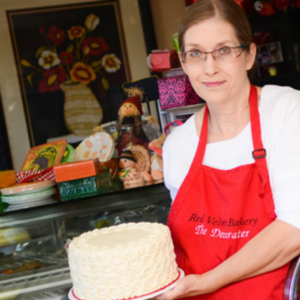 by Melanie Clemens
Often the most treasured family heirlooms are recipes handed down from generation to generation. At the heart of Edmond’s Red Velvet Bakery, owner and baker Tammy Morgan tells the story behind their homemade confections. “I grew up on a farm in southern Oklahoma watching my mother make pies. Red velvet cake and coconut cream pie...
Read More  >