“Thank you my brother, my sister! My family is safe in the airport…God bless you, you are angels!” When David and Meagan Owens heard these words from Afghan Interpreter, Fahim, they finally breathed deeply after weeks of sleepless nights.

After graduating from Edmond North in 2001, David enlisted in the Marines and immediately deployed to Iraq. In 2007 he left the military and began working as a civilian contractor at the US Embassy in Kabul. That’s where he met Fahim. “We worked together and like anywhere else, there’s dudes you know you’re going to get along with and dudes you don’t. Fahim really helped me understand Afghanistan and how to navigate the culture.”

After working multiple contractor jobs in Afghanistan, David returned to Edmond and began working as a home builder, finding time to marry Meagan, who he had courted from overseas. “We would FaceTime in the morning and FaceTime at night while he was there, and sometimes he would tell me, ‘You won’t hear from me for three days’…I was glad to have him back home.” says Meagan.

Both David and Meagan kept in touch with Fahim over Facebook, exchanging holiday greetings and checking on each other’s families. “But then, when things heated up over there in mid-August, Fahim asked me to help get him and his family out of Afghanistan.” remembers David. That’s when David and Megan led an international rescue effort from their living room in Edmond.

“I contacted some Marine buddies and we all started sharing information on the security situation in Kabul, specifically at the airport and how to get our Afghan interpreters through the Taliban checkpoints and gates into the airport.”

The couple dove into social media networks, public and private, to learn as much as they could about real-time events halfway around the globe. “David can talk and so he did most of the networking to find who had good information. I’m more a behind-the-scenes organizer and so I vetted all these people to see who we could actually trust.” beams Meagan.

Fearing Fahim may be captured with official documents as he traveled, David encouraged him to take photos of IDs, birth, and marriage certificates, to text them all here, and destroy all the originals. “We uploaded every bit of documentation he had into the cloud and whenever some agency needed info, we had it right there ready to go.” says Meagan.

David coordinated directly with an Afghan commander to get Fahim and his family out of their home and into a safe house. The next challenge was getting them through a gate into the airport. “The situation was changing so fast. A gate may be open one minute and closed the next. Until they were in the airport, they could have been picked up or killed by the Taliban any minute. I was talking to Fahim telling him where to go when.”

Finally, after a long wait, the Owens heard the words that their friend and his family were safe. Fahim, his wife, and four children are currently on a military base in New Jersey awaiting processing and relocation. “I would love to have Fahim nearby. The mayor of Duncan has offered to house them and get him a job. I can’t think of a better family to have here.” says David, relieved.

To learn more, go to Facebook.com/owensbucket.

by Laura Beam
Every day at Yo Pablo is ‘Taco Tuesday’ because everything on this inventive menu is something to celebrate! Think fresh, handmade ingredients, unique sauces and meticulous preparation. These are next level tacos. And they’re the reason this lively spot is the hot new go-to for family meals or hanging out with friends. Opening the first...
Read More  > 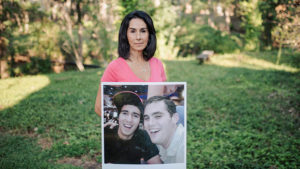 by Amy Dee Stephens
Drug overdose. It’s every parent’s fear, and now that Denise Roberts has lived through it twice, she’s on a mission to raise awareness. “Because if you find out your child has cancer, there’s support. If you find out your kid’s addicted to drugs, nothing happens. Silence. There was no support. Family members pull away. No...
Read More  >