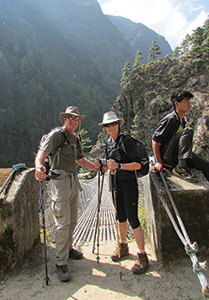 Bill & Susan Dragoo sit back in their comfortable deep
chairs and laugh about that day they got lost in the slums of Kathmandu. Winding
through the sinister rambling grottos while trying to find a bar frequented by
bicyclists who explore Nepal, they wandered through the shadows, dodging
lurking men and filth. Susan was not amused. Bill was pragmatic.

They never found that bar, but they found yet another story
to share about exploring the world and not fearing the unknown. World
travelers, writers, motorcycle enthusiasts and storytellers, the Dragoos are
Oklahoma’s answer to Will Steger and Jessica Watson—curious explorers of both
America’s wild and the planet’s wildest places.

From being uncomfortable in Beijing to being zapped by the
famous suicide showers in Costa Rica to trekking to Mount Everest Base Camp in
Nepal, the adventurous life of Susan and Bill Dragoo just started with a step
and a willingness to try anything.

Bill Dragoo earned his love of adventure in the Boy Scouts
and has never lost that yearning for the outdoors.

He teaches seminars at Backwoods Outfitters on how to pack
light and other topics, and it was a contest through Backwoods that sent him
and his wife to Nepal in October. Susan is an executive at Integris Health in
Edmond. She and Bill met at a Bible study in 2003, and their first date was on
the back of a Harley Davidson to see the Harley Drag Races in Oklahoma City. “I
had traveled for business and to see family, but Bill and I really stepped it
up when we met,” said Susan. “Our honeymoon was in Italy, and we rode
motorcycles from Rome to Chique Terre. It was beautiful, of course, and we’ve
been busy since then.”

After marrying, the two began backpacking on a regular basis
and Susan invested in her first dirt bike. In 2007, China beckoned and the
couple, along with Susan’s youngest son, trekked the Tiger Leaping Gorge and
hiked the Great Wall. “Asia is a challenging place,” said Bill. “The food is
strange, it’s dirty and you can’t speak the language. But you have to pay to
play. It’s not always comfortable like here, but if you want to experience
something unique, you may have to pay and deal with sleeping on a straw bed or
having rats in your room.”

From Utah’s Buckskin slot canyon to Mozambique in South
Africa to the rocky terrain of Nepal, the Dragoos just do it.

For many, adventuring seems impossible, but Susan says
anyone can do it if he or she believes it. “Most people just don’t see that in
themselves, but it’s there,” she said. “Fear is what stops them. It’s not the
kids, or the job or the bills­—it’s not believing they are able to do it.”

Susan and Bill Dragoo, Oklahoma intrepid explorers, share
their best tips on how to discover the magic of fierce places and how to begin
to live the astonishing fearless life.

A bicycling enthusiast, Bill spent 17 years in the car
business before realizing he wanted something more in life. So, he quit his job
in 2001 and spent 53 days riding his bike from Bar Harbour, Maine, to
Anacortes, Washington. “It was 4,203.6 miles, and that’s when I learned to pack
light,” Bill said. “From that point, I never wanted to go back.”

After that trip and after he met Susan, Bill began writing
articles for Adventure Motorcycle Dual Sport News and traveled to California to
cover the American Adventure Riding Challenge. Not only did he write about it,
he competed in it and won—as one of the older competitors! Although he wasn’t
chosen for the BMW GS Trophy Competition Team that year, he made it the second
time he competed. That competition brought him to Mozambique, South Africa.
“I’ve been to Costa Rica, Mexico (when they said you shouldn’t go to Mexico)
and China,” he said. “People in general think they don’t have enough time or
money. Grab those opportunities.”

Susan likes to
prepare. Scary smart, she grasps solutions and plans better than most people,
which makes her a perfect companion for the fly-wild Bill. She’s adaptable
about how and what needs to be done. “Start a plan and make it happen,” Susan
said. “Right now, I’m thinking of going on a through-hike (long trail hike) of
223 miles in the Ozark Highlands. Start planning, but leave yourself open to
chance as well.”

A perfect example is when Bill and Susan were visiting the
rough and primitive area of Big Bend National Park. They didn’t make
reservations because they didn’t know how far they would make it each day. “Be
flexible, but be well-prepared. If you camp over winter—which is the best time
to visit Big Bend—make sure you have warm sleeping bags and gear. Be aware.”

Both recommend knowing enough about where you are going to
be well-equipped but to be flexible enough to enjoy the unexpected adventures
that arise from the unknown.

Not everyone can jump right into a trek across Nepal or
weeks in Beijing. Sometimes a big escapade can start in the backyard. “If you
want to be a backpacker, be a hiker first. There are some great places to
explore close to home, like the Wichita Mountains or the trails around Lake
Thunderbird,” said Susan. “Test yourself closer to home. Do short trips. Try a
two-night backpacking trip to the Ouachita Trails. Work with someone
experienced to get those skills and just start somewhere.”

Bill says he would never recommend that everyone quit their
job to travel the world. He knows not everyone is in a position to do that, and
not every-one wants to. “I present a story called ‘Adventure Dreams’ because everyone
has a story and a dream. You have to acknowledge that everyone has dreams and
our limits are only those that we impose upon ourselves,” Bill said. “Sure, we
have kids, homes and bills, but in most cases, these aren’t what keep us from
doing it. It’s fear—fear that you can’t sleep in a tent or speak the language.”

Of course, there are physical limitations that have to be
considered as well as a person’s skill level. “It depends on what your idea of
a real adventure is,” Bill said. “But no matter what, you’ve got to get out of
the hotel and get a little uncomfortable. Adventures happen when things are
unexpected. It doesn’t have to be unsafe, just unexpected. I don’t have much to
offer to those who don’t leave the hotel.”

Believe and have fun!

“Dream big and believe in yourself,” Bill said. “Believe you
can do it and just try it. You’ll see things you don’t expect—like just how big
the Milky Way is when you leave the lights behind.”

Susan said that believing you can handle situations and
having the confidence to get though uncomfortable situations is key to enjoying
and exploring the world. From climbing Elk Mountain in Oklahoma’s Wichita
Mountains to joining a hiking club at Backwoods, she said most people are
surprised by what they discover they can do. “Don’t think you can’t do it;
think you can do it,” she said. “Find your physical range. Realize that you
don’t have forever—so decide to go ahead, make a plan and just do it. The key
for me is that I think about what I want to accomplish. I create a list of
intentions and state my goals. There’s a lot of power in stating your goals.” 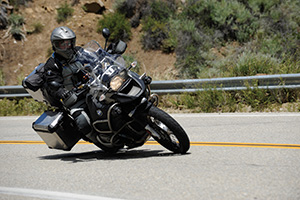 Bill tempts  both fate and traction on California’s Highway 1 in celebration of his victory in the 2010 Adventure Riders’ Challenge competition. His place in this event earned him a spot on a three-man team representing the United States in a world-class motorcycle contest where 13 countries competed in South Africa for the coveted BMW GS Trophy. 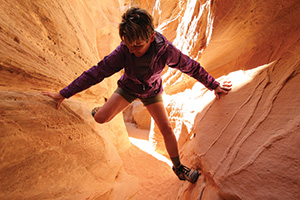 Susan negotiates a slot canyon on the White Domes Trail in Valley of Fire State Park, Nevada. One of her latest passions is exploring these cracks in the Earth’s strata, witnessing a natural beauty seen only by a few. 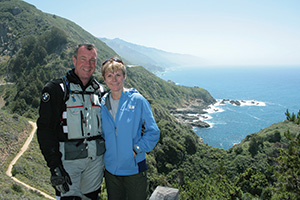 One of the country’s most beautiful stretches of highway passes through Big Sur, California. With the Adventure Rider’s Challenge competition behind them, Bill and Susan enjoy a moment overlooking the Pacific Coast en route to northern California for more motorcycle adventures. 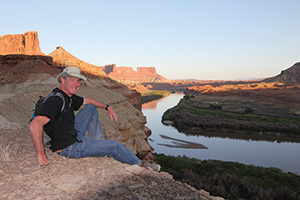 The White Rim Trail begs contemplation with its magical vistas and lingering ghosts of the ancients in Canyonlands National Park in southeastern Utah. Bill takes a break during a hike on the Fort Bottom Trail to an Anasazi ruin on a point overlooking the Green River. The 100-mile Trail offers spectacular views of the Green and Colorado rivers along and around the island in the Sky mesa. 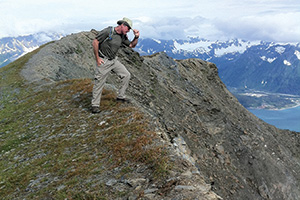 Bill peers over a ridge near the race summit of Mount Marathon, a 4,600-foot peak overlooking Seward, Alaska and Resurrection Bay. This mountain is the site of Alaska’s most famous footrace, begun around 1915. The Dragoos ascended via the gentler “hiker’s trail,” with a steep scramble t the summit, then returned by way of the “runner’s trail,” surfing scree on the near-vertical descent. 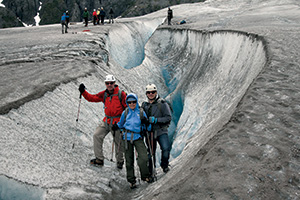 Johnny joins his parents for an ice hike in Kenai Fjords National Park near Seward, Alaska. Crampons and helmets are a necessity when negotiating the crevasses and moulins of of Exit Glacier. 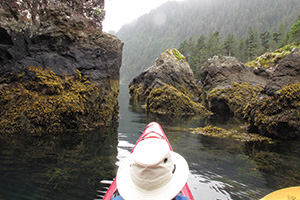 Bill’s camera captures Susan in awe of her surroundings as they paddle a sea kayak near Orca Island, nine miles by boat from Seward, Alaska. Visitors to the tiny private island are lodged in eco-friendly yurts. The duo seldom misses an opportunity to get off the grid where the noise of the city is only a distant memory. 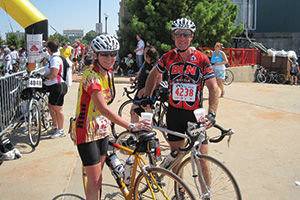 The Hotter N Hell 100 is the region’s iconic endurance ride for bicyclists. Bill, a veteran of several Hotter N Hell rides, accompanied Susan for her first—in and around Wichita Falls, Texas. 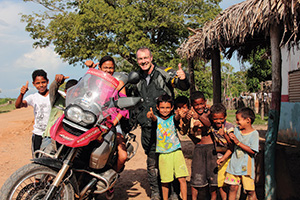 Motorcycles represent fun and adventure, not matter what the language. Bill seldom misses a chance to share the joy with local children he meets along the way. These kids in rural Colombia are happy to oblige the camera as they give a hearty thumbs up to the world far away. 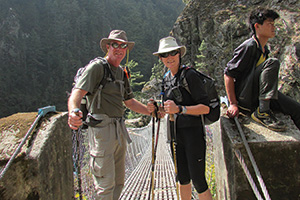 The Dudh Kosi is a river draining the Mount Everest massif in eastern Nepal. Bill and Susan prepare to cross a suspension bridge over the rushing watercourse on a hike to Everest Base Camp. The pair’s two-week, 80-mile trek to Base Camp, at just over 17,000 fee elevation, began in the village of Lukla after a flight from Kathmandu into “the worlds most dangerous airport.” 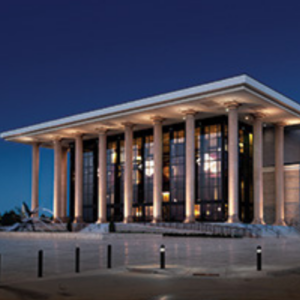 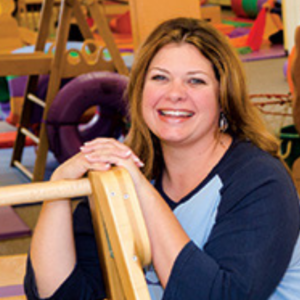