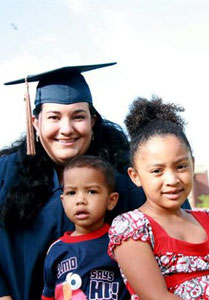 Lynda Powell was struggling. The single mother’s difficulties ranged from the basics of food and clothing to the logistics of getting to and from work or getting through semester after semester of college. And to make things worse, she couldn’t find many resources for support.

“Was it gas in the car or food on the table – these are real struggles,” Powell says. At her lowest point, Powell pledged that if she could just make it through, she would dedicate her life to helping others in similar situations. And now, through founding the Bethel Foundation, a nonprofit which gained 501(c)(3) status in 2004, she is.

The organization, which served 9,549 women and children last year, offers a variety of opportunities and help for single mothers in the metro, one-third of which are from Edmond, Powell says. “I think it’s important for a mother to know that there’s someone that’s been through this, understands the struggles and knows how to get out of it,” Powell explains. “So, it’s to help guide them and be there for them.”

These are mothers like Katherine, whose last name is being withheld for safety reasons. It took Katherine, a single mother of six, almost two years to get out of an abusive relationship. At first she sought the services of the foundation from clothing to food, in sporadic times of need. Then after moving, her daughters ha