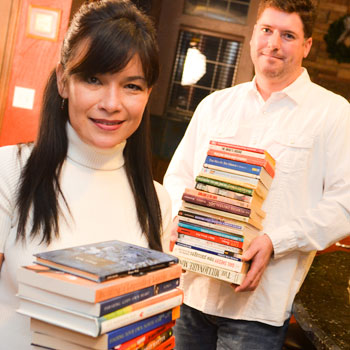 What began for Catherine Godwin, as the normal task of grant writing for a local company ended up opening her eyes to an entirely surprising and disconcerting array of statistics. Those statistics screamed to the Edmond mother, “Do something!” and so she did.

What Godwin learned was the impact of the number of Oklahoma’s incarcerated women and the connected issue of the overburdened foster care system that plagues the state. Doing something to ease the burden was a natural step for Godwin, who has spent time in the military, helped raise her and her husband’s five children, and is continuing her education at the University of Central Oklahoma.

“In my family, doing community service is a huge part of who we are and making a positive footprint in the world,” she says.

This time, it started as the desire to collect clothing for families at the treatment center for Eagle Ridge Institute. As a nonprofit organization, they provide rehabilitation services for substance abusing women with the opportunity to keep their children with them during the process.

“Edmond is an affluent area,” Godwin says. “So I said we should ask our friends to donate their children’s clothes that were all brand-name and barely used, as you can imagine. We ended up with an overwhelming amount of clothes,” she explains …collecting 15 bags of clothes.

Donations are crucial to the mission of Eagle Ridge’s family treatment center, explains Executive Director John Mayfield. “We need help from the public to really make a holistic program where we’re really meeting the needs of our clients in all areas, so donations are greatly appreciated,” he says. He also echoes the concern Godwin has over the burden of so many incarcerated women. “We think it makes more sense to send women who have a drug problem to long-term treatment,” he says. Their program lasts from 12 to 18 months and since many of the women have lost everything during this process, donations are more than needed. Currently, he says, the center is in need of a new washer and dryer. And of course, clothes.

That is where Godwin saw her opportunity and would like to do future donations for the center. But Godwin didn’t stop with the clothes. She realized that not every woman battling drug addiction gets an opportunity like Eagle Ridge and many have wound up in jail for nonviolent drug crimes. According to the website for Oklahoma Watch, an effort of a local journalistic impact team, “for 14 of the past 15 years, Oklahoma has locked up more women per capita than any other state.” They cite that “more than 65 percent of the women in prison were convicted of nonviolent crimes and more than 85 percent leave children behind, whose care becomes the responsibility of a family member or the state.”

This knowledge moved Godwin to act. “I can’t comprehend losing your children to the foster care system and then on top of that being in an environment where you hope to come out a better person, but not having the tools there that we have every day in the outside world,” she says.

One such tool Godwin puts great importance on is reading books, reading every morning as it helps her begin her day right. She hopes to positively influence the women and men in the Oklahoma County jail through books.

Godwin and her family began asking their friends and using social media, like Facebook, to collect motivational or inspirational books to donate. She now has over 100 books scattered all over her den. The books are specialized, usually from leaders and professionals to inspire life changes, Godwin says. “My hope is that someone will read something, so that when they start to make a decision they will remember what they read,” Godwin says. The donation has been cleared through the county jail, according to Godwin. Now, they are just waiting on the logistics to give the books over.

Godwin hopes to set a good example for her children ages 14 to 25. “If you start people when they’re younger understanding that they sort of owe something to their community then that spreads when they’re an adult.”

In terms of her community, Godwin knows she is lucky to call Edmond home and wants others to be inspired to act in their communities in whatever ways they can. “We’re so blessed in Edmond,” she said, “and it almost feels like we have everything and I keep telling my children ‘yes, we have a lot, but this is our chance to make something better.’ ”