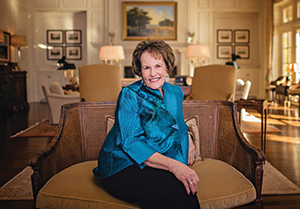 Mo Anderson may be one of the most successful and powerful leaders of the global real estate giant Keller Williams Realty, but she once wore only handmade clothes made from used feed sacks.

Anderson may live in a stunning mansion, but she once knew what it was like to be so poor that 25 cents seemed like a fortune.

Anderson may give hundreds of thousands of dollars to charities and to those in need, but she said that giving spirit came from her father who was a tenant farmer.

Anderson, a leader of Keller Williams Realty, helped build one of the most successful franchises in real estate history, but along the way she learned several key lessons on how to live a joy-filled life. She struggled through poverty as a child in the aftermath of the Great Depression. She lost her fortune in the oil bust of the 1980s and she worked so hard at times that she developed a heart condition.

But in her soul, Anderson said her life has been nothing but blessed. “You can have a joy-filled life in spite of all the things, all the challenges that have happened to you,” Anderson, now 80, said. “You can still rise above it. When I look back, I see how losing all of my money was the greatest thing because it set up circumstances that gave me the life I have today.”

From daughter of a tenant farmer to one of the most successful and wealthy CEOs, Mo Anderson now dedicates her life to the goal of living on 10 percent of her wealth while donating 90 percent to causes. But, in her heart, her true passion is sharing the knowledge that a joy-filled life is possible for everyone.

Anderson was born in 1937 in Ames, Oklahoma, the fifth child of a tenant farmer who moved his family from farm to farm for work. He had an eighth grade education, but Anderson said he was the greatest example of a Christian and his integrity still inspires her today. 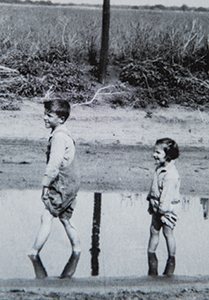 “He was the first one to arrive whenever there was tragedy or a problem,” Anderson said. “Once, when we were in Enid —on the rare occasions we had money to buy things—he had a quarter left. When we walked past the penny store, he saw a beggar and he gave that last quarter to the beggar. I was shocked. That was the last of our money. “He looked at me and quoted that scripture about when you do good things, your bread comes back buttered.”

Other days, while helping her father corral the livestock, Anderson would walk along the dirt lane and dream of becoming a music teacher. “That pasture lane was my place to dream,” she said. “I wanted to be a music teacher so much.”

Anderson herself was the first child in her family to attend college. She earned a scholarship to the Oklahoma College for Women, but transferred to the University of Oklahoma in her second year. Although she still dreamed of teaching music, the music department closed the practice rooms at 10pm. Anderson worked until 9:30pm most nights.

“I quickly realized I could not major in music, so I majored in elementary education,” she said. But magic happened. When she interviewed for her first job at Traub Elementary in Midwest City, the principal received so many letters of recommendation that touted Anderson’s music ability that he offered her the job as the school’s music teacher. “When God puts a dream into your DNA, He finds a way to make it happen,” she said.

Anderson and her husband Richard led a pleasant life together. She went on to be the music department instructor in Ponca City while her husband worked at Conoco, but one day she was shocked to find that her husband enrolled them both in a real estate class.

Life would never be the same.

Life eventually brought the couple to Oklahoma City where Anderson began a career in real estate. She and two others started Titan Realtors and then purchased a Century 21 franchise in 1976. By 1983, they were the third best operation out of 7,500 offices in the system. Five years later, the company sold to Merrill Lynch, and Anderson stayed to help Merrill Lynch develop offices and take on a leadership role.

When the company sold to Prudential, Anderson didn’t stay. She had made a small fortune when she sold her company to Merrill Lynch, so she was doing just fine… until the oil bust. “We lost it all,” she said. “We owed $1.3 million and we were close to bankruptcy. But we paid that money back. All of it.” 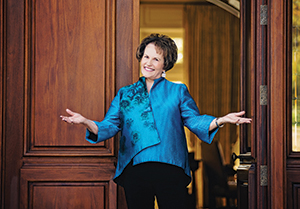 That tragedy led to an accidental meeting with Gary Keller, founder of Keller Williams Realty. Anderson signed on for a small salary and a portion of ownership and for the next decade, she worked so hard she began to develop heart issues.

“After 10 years of working my tail off, we went from 1,800 agents in 45 offices to 50,000 agents in 500 offices by the time I replaced myself as CEO,” Anderson said. Today, Keller Williams Realty boasts of 150,000 agents in 720 offices in 32 countries. Still a vice chair of the board, Anderson wasn’t done. She started Keller Williams Cares, which has a giving budget of more than $5 million. She constantly speaks at KW conferences about the importance of giving and giving back. She inspires agents around the world to raise money for their communities.

“I teach them our culture, which is to give, care and share,” she said. “I got that from my dad. That was also the joy of building a company—I have the ability to influence 150,000 people.”

Today, Anderson continues to give. A supporter of countless organizations, she said she one day wants to reach the goal of using 90 percent of her wealth to help others in need.

“I wanted to leave a legacy for my grandchildren and honor my parents and my husband Richard,” she said. “It’s about letting everyone know that no matter what, they too can live a joy-filled life.” 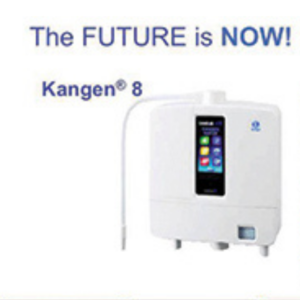 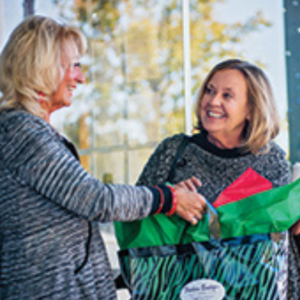 by Morgan Day
If you're a fan of popular downtown Edmond events like the annual Downtown Edmond Arts Festival, the Edmond Electric Parade of Lights and Downtown Edmond Fall Festival, you can thank a group of folks working behind the scenes to make those happen.
Read More  >