A Cause Beyond the Crown 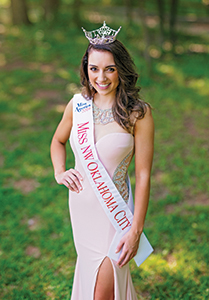 Young women competing in modern pageants are defying the stereotype of “beauty queen.”  Not only are they are intelligent, healthy, and confident, but they contribute an incredible amount of time to community service. Meet two local ladies who are proving that pageantry is definitely more about mission than makeup.

When Molly Patterson entered the pageant arena as a young teen, her motivation was to spend time with friends and demonstrate her violin talent.  Her poise and fiery fiddle-playing twice landed her as 2nd runner-up for Miss Oklahoma Outstanding Teen.

Over time, her attention focused toward earning college scholarships and making a difference in her community. Upon turning 18, Patterson was shocked at how few of her classmates bothered to register to vote. When she learned that Oklahoma has one of the lowest voter turnouts in the US, she decided to focus her volunteerism toward improving that statistic.

“Votes matter,” Patterson said. “My generation is robbing itself of the right to make choices for the community. This upcoming election will affect them, but if they don’t vote, they shouldn’t complain.”

Patterson began traveling to high schools, speaking to students on the topic of exercising their right to vote. She shares methods for making educated decisions about candidates and bills instead of relying on slanderous television commercials. Afterward, Patterson provides voter registration paperwork, asks students to fill it out, and personally turns in the forms for them. She has helped register hundreds of juniors and seniors, who later receive their registration card in the mail.

In June, Patterson was honored to place in the Top 10 as a candidate for Miss Oklahoma. Her ultimate goal over the next few years is to win as Miss Oklahoma and move on to the Miss America competition. For Patterson, it’s a title that will provide her an audience of 40,000 more people who need to hear her message about being politically engaged.

Following in Patterson’s footsteps is 16-year-old Megan Gold, who was 2nd runner up at this year’s Miss Oklahoma Outstanding Teen. When she wanted to enter her first Miss Edmond Liberty Fest competition three years ago, she was so shy that her parents weren’t convinced that she would go through with it.

“They didn’t even buy my clothes until the last minute,” Gold said. “But I did it, and I’ve learned so much about being confident and giving service to my community. I’ve worked hard to disprove people who compare what we do to reality shows like, Toddlers and Tiaras.”

Because of a personal experience, Gold focuses her volunteer work on ending hunger for senior citizens. When Gold was younger, her grandmother passed away and her grandfather was living alone. The family was shocked to learn that he didn’t know how to cook and was eating Vienna sausages and M&Ms for dinner. The Edmond Meals on Wheels program added him to a waiting list of 800 seniors needing food assistance.

Now, Gold is active on the leadership council for the Meals on Wheels program, and she personally delivers food and holiday packages to the seniors. It’s a cause dear to her heart.

For both ladies, being involved in Miss Oklahoma is a choice that comes with a monumental time commitment. Walking across stage requires sacrifice and self-discipline. Patterson and Gold dedicate two hours a day at the gym, plus weekly music lessons and practice, private coaching for public speaking and poise, staying abreast of current events, volunteering, making appearances, and maintaining high a grade average. All that, and they rarely eat pizza.

“It’s not about being stick-thin,” Patterson said. “It’s about eating right, having strong bones and staying fit for your whole life. I don’t walk around in a swimsuit every day, but when I do stand in front of 5,000 people in a swimsuit, it takes confidence. I can be proud of the hard work I’ve done both physically and mentally.”

“We are role models for healthy choices. As I get older, I have to work harder at staying in shape and saying no to cheeseburgers and ice cream,” Gold said. “It’s a life-style I’ve had to work at.”

Sometimes Patterson’s time commitments cause her to miss out on college activities, but she’s found her fellow students to be supportive. They call her “Molly Pageant.” 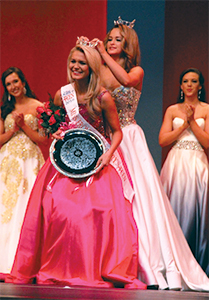 Of course, the glamour of pageantry comes during competition time, when the audience only sees the end result of all the sweat and sacrifice. Patterson and Gold both admit that wearing a ball gown on stage is a Cinderella moment.  It’s the perk that comes after months of hard work.

Even so, nervousness is a mighty force behind the curtain, and each competitor has her own way of dealing with it—but the nerves mostly disappear on stage as months of training kick in. Gold is thankful that she’s gaining valuable skills in public speaking, which will help her at future job interviews. Patterson has learned the importance of being on time, saying lots of thank yous, and “how to command a room without a crown and sash.”

Being on stage requires command as well. Patterson described the incredible pressure to win the appreciation of the audience and the judges during the talent competition. “We have 90 seconds to show our skills, and that’s not a lot of time to do what you’ve trained for your whole life,” she said. “I was pretty nervous being on the stage for Miss Oklahoma, but I felt calm at the same time because I’d worked so hard for that moment. Hearing my name called in the top ten was the best moment ever.”

Being in the public eye also prepares the girls to respond professionally when things don’t go as planned. Gold has had multiple sound system issues while performing her flute solo, and a few weeks ago, a screen fell on Patterson in the middle of her interview with the judges.

Both girls agree that confidence is an all-important skill gained from competing in pageants.

“Competing in Miss Oklahoma has taught me confidence,” Gold said. “I really look up to Molly Patterson for teaching me to look beyond my imperfections and be the best version of myself.”

“I make time sacrifices to pursue my dreams, but then I remember that I’m one of 50 extraordinary girls who gets to compete for the title of Miss Oklahoma,” Patterson said. 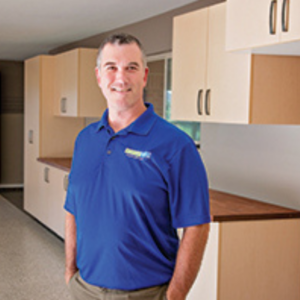 by Austin Marshall
The frantic pace of modern life often means our homes and storage spaces become just as cluttered as our schedules. The idea of reorganizing an entire closet or garage can be overwhelming, but one local company is ready to help. Tailored Living featuring Premier Garage of Edmond helps homeowners by developing customized office and storage spaces that reflect the client's needs, lifestyle and specific requests.
Read More  > 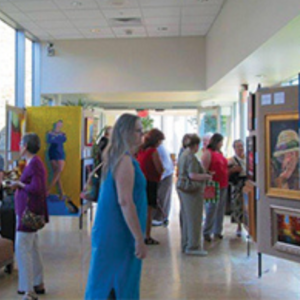 by Morgan Day
Cancer patients, survivors and supporters create art as an outlet, presented in the Celebration of Life Art Show by INTEGRIS
Read More  >